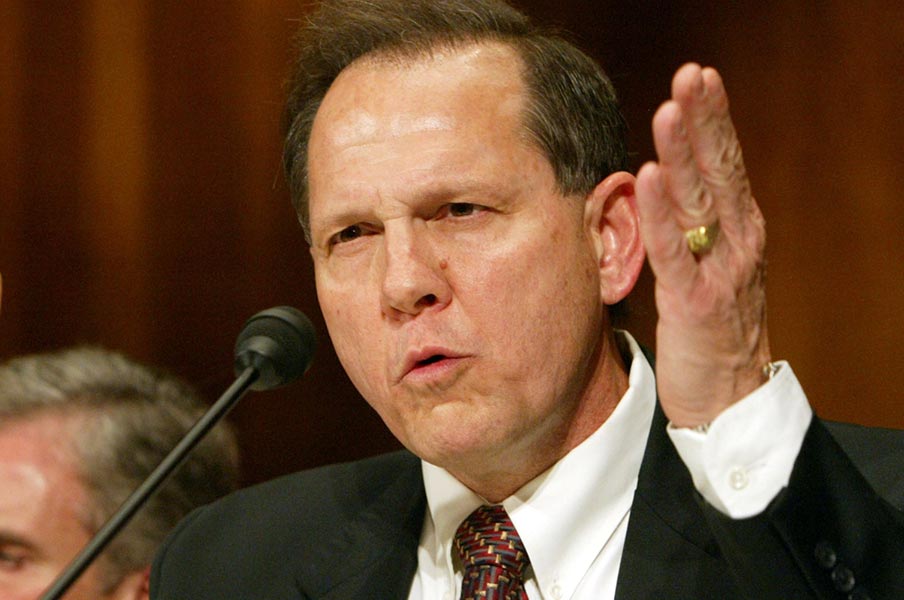 Alabama Chief Justice Roy Moore has something to tell you, ladies and gentlemen, and it’s going to be hard to hear.

Now, if you’re in the habit of listening to just about anything Moore says, especially on the subject of them homos, then you already know that giving an earful of hatred-fueled nonsense is one of Moore’s specialties. It’s a gift and he has it.

Of particular concern to Moore currently is the fact that the United States Supreme Court could very well make marriage equality the law of the land this month. Moore has already called for Ruth Bader Ginsburg’s head because he thinks she’s too friendly with the queers. And he’s called for out-and-out rebellion if the Supreme Court doesn’t tell gays and lesbians to crawl in a hole and die.

Now in an interview with CNS News, Moore is foretelling the destruction of America, because gays.

“What [SCOTUS is] doing is they’re toying with something that’s like dynamite and will destroy our country,” Moore said.

In other words, “I now pronounce you husband and husband.” KABOOM! So long U.S.A. It was fun — though very oppressive for anyone who wasn’t white, straight and male — while it lasted.

I, too, think there’s an attempt to destroy the institution of marriage, though I think Moore and I have opposing views about whose fault it is. Making marriage into a weapon in order to hurt a specific group of people is a pretty sick thing to do and certainly shows no respect for the institution that Moore and his ilk claim they’d fight to the death for.

And yet, same-sex couples who have been waiting years for the kind of legal recognition that Moore can take for granted are the enemies here?

I also take issue with Moore’s use of “literally,” as in “literally cause the destruction of our country.” Is it really so literal, Moore? Look, the misuse of “literally” makes me figuratively insane. And I find it hard to believe, no matter how icky Moore thinks gays and lesbians are, that he thinks marriage equality will for sure, 100-percent definitely cause the entire country to be annihilated.

Got that? Not all the gays want to destroy the country, but some of them just can’t wait! They’re rubbing their gay hands together in glee fantasizing about … about what, exactly? What is this post-apocalyptic hellscape Moore thinks homos are totally gay for? And who does he think is pushing for this scenario?

The vast majority of couples, whether gay or straight, want to get married because they love each other and want to make a go of this “spending our lives together” thing. Trying to start a family, whether it’s just the two of them or whether there are kids involved, would be awfully inconvenient in a destabilized and crumbling United States. Literally.