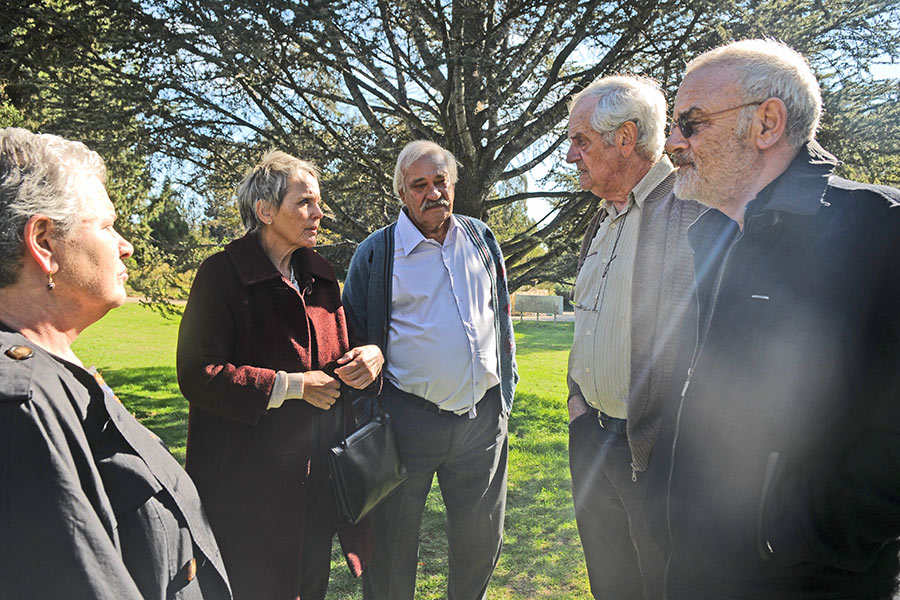 Humor is often used to get a serious point across. Tal Granit and Sharon Maymon, the writers/directors of the Israeli import “The Farewell Party,” opening June 19 at Ritz Theaters, use comedy to address the moral issues of euthanasia. While some viewers may happily swallow the cupful of honey needed to make this cloying film palatable, others may not.

The trouble with “The Farewell Party” is not the filmmakers’ salient points about terminally ill characters wanting to die with dignity, it is the obvious manner in which the topics are presented. The cardboard characters representing God-like hubris and voices of reason, as well as the depiction of members of the elderly and gay community, do the topic no favors.

In an assisted-living facility in Jerusalem, Yana’s (Aliza Rozen) husband, Max (Shmuel Wolf), is terminally ill. Max asks his friend, Yehezkel (Ze’ev Revah), to help him die, and they seek assistance from Dr. Daniel (Ilan Dar), a veterinarian who has access to drugs that can help Max peacefully slip away. Yehezkel, a tinkerer, creates a mercy-killing machine to inject the lethal drugs into Max’s system, and Raffi Segal (Rafael Tabor), a friend of Dr. Daniel, plans to help destroy the evidence. However, Yehezkel’s wife, Levana (Levana Finkelshtein), objects to the plan, accusing everyone of murder.

The euthanasia plot that binds these characters together — they are in high demand after Max dies using Yehezkel’s device — soon reveals various characters’ secrets. Yehezkel, who loves his wife, Levana, covers up for her dementia. He excuses her forgetfulness with recipes, or her burning things in the oven. Dr. Daniel, it is discovered, is sleeping with the married Raffi on the down-low. This comes to light after Raffi is discovered naked and hiding in Dr. Daniel’s closet in the film’s clunkiest metaphor. This revelation is followed by a joke in which the elderly Dr. Daniel requests that his friends don’t discuss or disclose his homosexuality. He explains, “My mother doesn’t know.”

Mostly, “The Farewell Party” tries too hard to shove its messages down viewers’ throats, like a doctor forcing a patient to swallow a pill. A pair of scenes in which Yehezkel is pulled over by a cop for speeding, or talking on the phone while driving, are meant to emphasize his illegal activity and generate suspense, but this running joke is heavy-handed and unfunny.

Likewise, after Levana arrives naked to dinner one night, Yehezkel and Yana comfort her feelings of shame and embarrassment and her loss of dignity. To make her feel better, the friends all gather together naked in the greenhouse. When they are discovered, a facility administrator reprimands them. This episode is merely a parallel for the voice of authority to address the greater crime of euthanasia, but the seniors are not sufficiently scolded for their lawbreaking. Instead, the moral issues they confront are more appropriately raised when a man needing the gang’s services threatens blackmail if they don’t comply, or one member of the group keeps the money they are offered for their efforts, infuriating the others.

Had “The Farewell Party” actually grappled with the ethical quandaries on display, rather than use them as a framework for its mild dark humor, it would have some impact. But the topics are feebly addressed. The only real voice of dissent is Levana’s, and her argument for keeping the terminally ill alive is that a man with one working finger could still write a book. It’s a valid claim, but it is undone when her character visits a depressing nursing home and has a change of heart.

The best element in “The Farewell Party” is the way Levana describes “disappearing” as her mind starts to fade, or pleads for loved ones remembering her other than how she appears in a hospital bed. There is a real poignancy as she starts to lose touch with things and confronts her own mortality. Unfortunately, the filmmakers gild the lily and show her decline with various scenes of her using salt instead of sugar in cookies she is baking, or eating out of a trashcan. Her dementia is also exploited to jerk tears and restates its case in favor of euthanasia.

For all its flaws, Levana Finkelshtein does give a commendable performance as the film’s pivotal character. She expresses such emotion that even when her face is vacantly staring off in the distance, Finkelshtein is moving.

Granit and Moymon have made a crowd-pleasing film, but they should have made a more thoughtful, funny or impassioned one. The treatment of seniors and gay people is so superficial it’s insulting.

Halfway through “The Farewell Party,” the characters perform a song about life, death and “Neverland.” This sequence will certainly charm some viewers, no matter their position on euthanasia. However, audience members annoyed by the antics of the characters will feel they have suffered enough. This film is so insipid, it may raise ire rather than spirits.