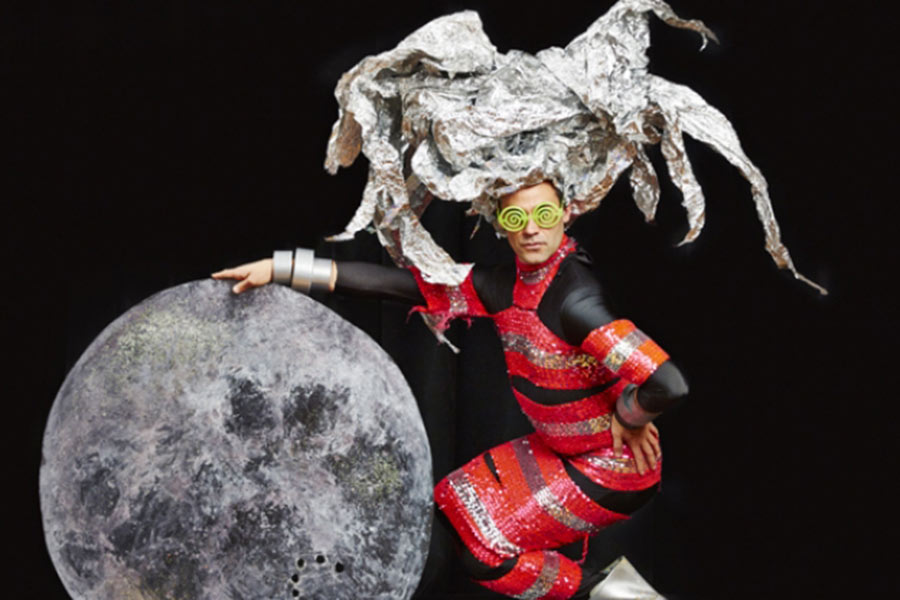 Whether you know it or not, you’ve likely been enthralled with all that Pig Iron Theatre has done for 20 years.

“Phew, I’m as surprised as anyone that it’s been 20 years since we started,” said Dan Rothenberg, a founding Pig Iron artistic director, with Gabriel Quinn Bauriedel and Dito van Reigersberg.

Come May 22 at FringeArts, you have the chance to be as enthralled with the Philadelphia premiere of “I Promised Myself to Live Faster” — “an intergalactic gay extravaganza featuring closeted extraterrestrials, high-stakes pursuits and nuns from outer space” — as you have been with their legendarily eccentric, ensemble-driven abstractions on devised theatrics and coy cabaret, Jacques Lecoq-based clowning and movement arts, and deeply wounded and wondrously funny texts.

But how much do you really know about the theater? I spoke to Rothenberg and van Reigersberg to get to the heart of all things Pig Iron.

PGN: What is your company’s outreach to the local LGBT community? Should there be one apart from general marketing?

DVR: We’re reaching out to LGBTQ groups and such, giving steep discounts to the show to those groups (99 cents!). I think the subjects the play deals with — gay protagonist, drag queens, fantasia, camp, Grindr — are of special interest to those groups.

PGN: This is also the first time in some time where you guys ID a work as “gay.” How did this come to pass?

DVR: We created one other gay-centric trilogy about Federico Garcia Lorca and presented them in the Fringe Festival in the ’90s. But I’m really the only gay-ID’ed member of the company and so other projects haven’t necessarily addressed gayness. But, somehow the question of how [drag alter ego] Martha [Graham Cracker] and Pig Iron might collide blossomed and bore fruit with this new one. Pun intended.

DR: Three years ago we were Japanese. This year we are gay. We’re shape shifters!

PGN: What has stayed the same with Pig Iron all this time?

DVR: An ethos of investigation, a dedication to physical and vocal warmup, a spirit of inquiry/nerdiness/investigation and a blend of clownish silliness and poetic dreaming.

DR: This process of figuring out what we want to create and who is the lead artist or provocateur in each piece; it’s pretty organic. I think over time we’ve started to trust our guts more. When we started, we had a lot of vocabulary for the formal experiments we wanted to do, and we had this shared sense of humor, but we didn’t have as much vocabulary to speak about the things we really cared about. This started to change when we worked with Joseph Chaikin and made “SHUTEYE” in 2001. We became more comfortable speaking out about the things that move us as people, the thorny and difficult and undefinable stuff. At this point, we have more trust in the unknown, and we spend some of our energy looking for “that thing I keep thinking about but I can’t quite tell you why.”

PGN: How does “Promise Myself” playwright Gregory Moss figure into the Pig Iron universe and how did you guys go about collaborating on this script?

DVR: My favorite moment in a collaborative process is when I can’t quite remember whose idea this was or that was, and there’s a sense that the entire group pushed the idea along together. Sometimes a costume unlocks a character, sometimes a joke during break gets incorporated, sometimes a brilliant improv turns directly into script, sometimes the playwright’s words are perfect. We do a lot of backing and forthing between set text on a page and “improvising over” what’s been written. Greg took a lot of raw ingredients, watched a lot of improvs, saw the characters and relationships take shape in the actors’ bodies and spun gold from a lot of chaos.

DR: There is nothing strictly anyone’s by the time the play goes up. Greg’s work is everywhere and the actors’ creations are everywhere.

PGN: Who is the sci-fi fan between you?

DR: I actually don’t consider myself a sci-fi fan. I mean, I was buried in it as a child. But now that I’m saying this, I realize a big part of this play comes from the feeling of fandom you have as an 11-year-old, the way feelings are so saturated at that age. The love of certain books and movies, and how that all gets mixed in and mixed up with the mythic moments of discovering your sexuality. Maybe you can’t talk about what you’re experiencing at 11 or 12, but you can talk about who is right and who is wrong in some outer-space adventure.

PGN: There’s a lot of Charles Ludlam’s inspiration in this. How is that he seeped into this work?

DVR: Only Ludlam can be Ludlam, but we take inspiration and energy from this titan of theater. An important concept we discovered was the valuing of “maximalism” — Ludlam coined this phrase himself, and was all about it as opposed to minimalism. A spirit of mischief runs through the world of the play, and an operatic indulgence that runs counter to a kind of “discretion” or simplicity that Pig Iron might value in other work or contexts. Hopefully if it’s going right, there’s a breathless giddiness that the play evokes from its permissions: permission to be stupid, to be emotional, to be ridiculous, to pull out all the stops, to overdo it.

DR: I think one line of inspiration between Ludlam’s Ridiculous Theatrical Company and Pig Iron is our desire to announce “This is theater!” to the audience with our work — to see the audience and invite them into the reality that things are happening on stage, not in a “realistic” and imaginary space.

DVR: It was just the way things worked out. And for a while that was good. Maybe so that I could have something non-collaborative, or that was more purely my own expression? But I am so happy they came together.

DR: On my end, I was reluctant to mess with the Martha chemistry. Part of what makes Martha brilliant is Dito’s willingness to absorb the energy in the room that night, and then almost free associate. I remember one show in which Martha would sing the theme from “Good Times” at random intervals. I can be kind of persnickety and specific in how Pig Iron plays get structured, so I just didn’t want to direct Martha — Martha’s limits are unknown, and I don’t want to be the guy who’s deciding what the boundaries should be so that a play-play can happen.

PGN: Yet, there are drag characters in “I Promised Myself” as performed by Dito …

DVR: I am hoping she reads as a little different than Martha. But hey, it’s me in a dress and a wig and a hairy chest. I would understand if people called that drag queen “Martha.” She has her own rules I think.

DR: Martha is in the DNA of the new show. The drag character Dito does is Martha’s cousin.

PGN: How would you say “I Promised Myself” breathes, moves, acts and rants differently than anything you guys have done in the past, yet maintains the company’s signature?

DVR: It’s highly physical, poetic, at times silly, relies deeply on actors and doesn’t take itself too seriously. All that feels Pig Iron-ish. But this one goes for broke: It’s maximalist, it isn’t demure or discreet, it’s a little show-offy and that feels new. Also it’s so, so gay. There are tantrums, wigs, nuns and sequins for days.

DR: I’ve spent a lot of my career trying to avoid “showing off” — beaming to the audience, “Aren’t I wonderful? Isn’t it wonderful I can do this in front of you?” “Live Faster” demands that indulgent, delicious energy.

“I Promised Myself to Live Faster” runs through May 31 at 140 N. Columbus Blvd. For more information or tickets, visit http://fringearts.com/event/i-promised-myself-to-live-faster/.