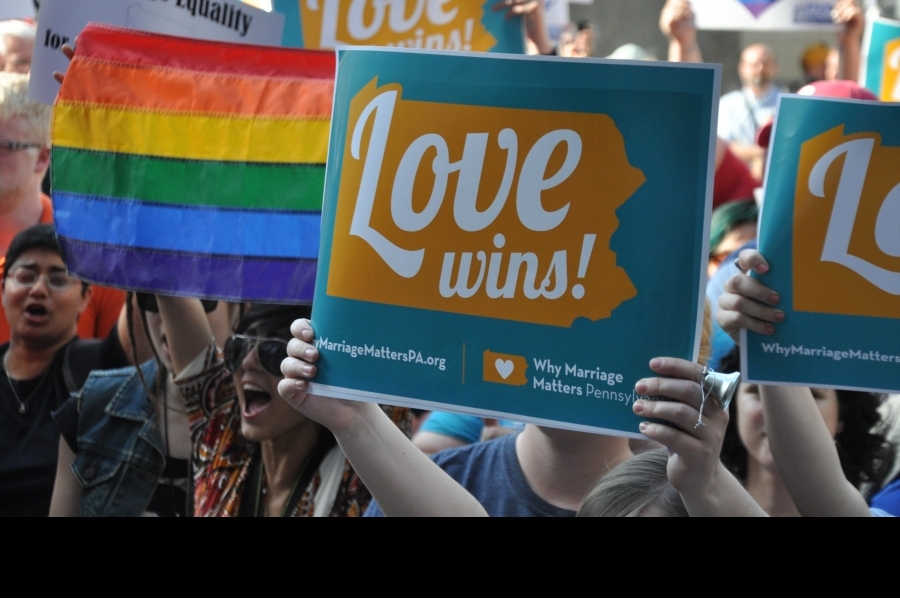 One year to the day after they nervously gathered to await news on their court case, plaintiffs in Whitewood v. Wolf again assembled — this time to toast to equality in Pennsylvania.

May 20 marked the one-year anniversary of a ruling that brought marriage equality to Pennsylvania.

Hennessey was one of several plaintiffs who waited for news at the Philadelphia office of the American Civil Liberties Union of Pennsylvania, which, along with firm Hangley Aronchick, represented the nearly two-dozen plaintiffs.

“One of the attorneys started reading it out loud as soon as they got it and it was so exciting,” she said. “We were ecstatic, but truthfully, everyone expected there to be a stay.”

“Ecstatic” was also a word used by plaintiffs Angela Gillem and Gail Lloyd.

The couple, together for 19 years, learned of the ruling from an ACLU alert.

“It was such wonderful news,” Gillem said. “It felt so affirming.”

Despite a potential halt from then-Gov. Tom Corbett, a Republican, many plaintiffs, attorneys and a sea of community leaders and members amassed outside City Hall about two hours later, waving rainbow flags, as several couples headed inside to obtain marriage licenses. The next day, Corbett announced he would not appeal the decision — allowing marriages to start May 23.

“I don’t know if anyone envisioned it,” attorney Tiffany Palmer said about the notion of marriage equality in Pennsylvania in 2014. “It went a lot faster around the country in general than I think most people expected.”

Many couples traveled to other jurisdictions to marry before Pennsylvania became a marriage-equality state.

Gillem, 62, and Lloyd, 56, were married in November 2013 in Washington, D.C., but said the Whitewood ruling provided another layer of legitimacy to their union.

“It was very important to us that where we live was a place we could be seen as married,” Lloyd said. “It did feel different [when Pennsylvania legalized same-sex marriage]. It felt solid, and I felt relaxed finally.”

Hennessey, 54, and her late wife, Mary Beth McIntyre, who were together 29 years, married in Massachusetts in 2010, shortly after McIntyre was diagnosed with cancer. She died in 2013.

“Our marriage was never recognized but it’s still thrilling for me every time I hear someone say ‘wife’ or ‘husband.’ I unfortunately just got the ‘widow’ term, but it’s something I really wish we had been able to do together,” Hennessey said.

After the Whitewood ruling, Hennessey was able to apply to have McIntyre’s death certificate revised, a final copy of which is pending.

“It was a shocking thing that her death certificate listed me as the ‘informant.’ It sounded just like the person who called and notified the undertaker that somebody died,” Hennessey said. “But now the death certificate is going to acknowledge that she was married when she died.”

The ruling also paved the way for couples to end marriages performed in other states.

“I’ve started doing a lot of divorces, which I wasn’t able to do for same-sex couples at all before the ruling,” Palmer said. “So that’s been a huge change.”

However, Palmer noted, not all separation-related issues are ironed out. The court still has to rule on several pending cases involving the dissolution of civil unions or domestic partnerships from other states.

Also unresolved is the concept of common-law marriages; although recognition of such unions was abolished in 2006, heterosexual unions from prior to that date are still accepted.

“There are people who’ve been together 20, 30, 40 years who are separating so we have a couple cases pushing the issue of recognition of common-law marriage for same-sex couples,” Palmer said.

Parentage laws were also greatly impacted by the Whitewood ruling. Even though second-parent adoptions are no longer required for children conceived through assisted-reproductive technology when one parent is not genetically related to the child, Palmer said she cautions her clients to still complete a stepparent adoption.

“Not doing it still legally puts the child at great risk,” she said. “A lot of people aren’t doing them now but they should be and we’re seeing why when it comes to custody cases where someone is claiming the other person isn’t a parent because they’re not genetically related.”

Another issue that Jerner has seen is that of couples who waited to marry until Pennsylvania became a marriage-equality state — yet one of the partners died before they were married for the nine months that is requisite before the survivor becomes eligible for benefits. As the policy stands now, Jerner noted, even couples who were together for decades before marrying would, in that case, be denied.

But, he added, the unresolved SSA issue should not deter Pennsylvanians from applying for survivor benefits.

“People should still apply because there is active litigation — not just in our office but around the country — and it’s worth getting the claim in, even if it’s denied,” he said. “Get the claim in and the start date set because generally benefits will be retroactive to the date of the claim. And hopefully we’ll prevail.”

One immediate change stemming from the ruling was that companies that offer insurance benefits to the spouses of employees had to treat same-sex spouses equally.

PGN followed the case last summer of SEPTA denying benefits to same-sex spouses of union employees, which was ultimately rectified in August. Other than that case, Palmer said, corporate compliance with the ruling has seemingly gone smoothly, though governmental cooperation has been more challenging.

“From what I’ve seen, companies have gotten on board pretty quickly. I didn’t have many clients who weren’t able to add a spouse to their insurance,” she said. “But it seems like state and government organizations are taking longer to catch up. Some of the state and court forms still say ‘husband and wife’ or ‘mother and father,’ like on birth-certificate forms at hospitals. There’s still some implementation work to be done.”

Despite some snags, the last year has made a world of difference to the plaintiffs.

Gillem said one of the biggest shifts she noticed was in her own comfort level.

“The change for me wasn’t just in Philadelphia or Pennsylvania, but internal,” she said. “Having been publicly and legally legitimized by our state, I feel more comfortable walking down the street holding Gail’s hand. I was pretty out before, obviously, but it just feels more easy in a way now to be out.”

And more change could be coming, as the U.S. Supreme Court is set to rule next month on whether same-sex couples have an inherent right to marry — which could bring marriage equality to the entire nation.

Last month, Freedom to Marry hosted a rally in Washington, D.C., the night before SCOTUS heard arguments in the case, inviting hundreds of plaintiffs who participated in state marriage-equality challenges across the country.

Hennessey said it was a bittersweet occasion.

“It was so exciting meeting people from Indiana, Kansas, all over the United States. It was kind of like, ‘Damn, Mary Beth, I wish you were here now,’” she said, noting that McIntyre died May 18, 2013, just about a year before Pennsylvania won marriage equality. “It’s all kind of intertwined this time of year for me. But before Mary Beth passed, she said, ‘You have to get this done. You have to do it.’ And I truthfully didn’t think I would see it in our state in our lifetime. And here we are. And now I believe it’s going to happen throughout the nation in my lifetime.”