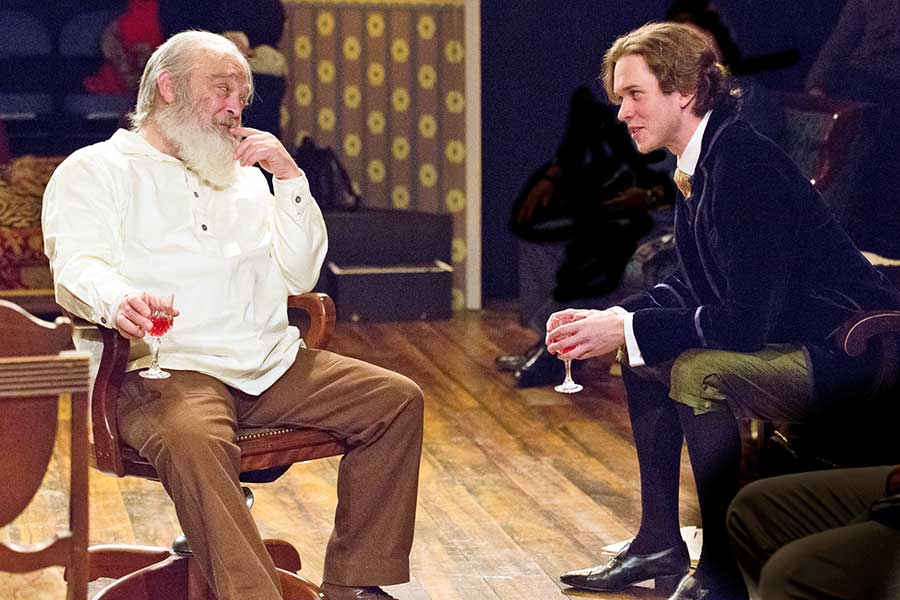 Oscar Wilde was one of the wittiest gay playwrights, poets and writers of epigrams in the English-speaking world, and the author of the groundbreaking novel “The Picture of Dorian Gray.” Wilde, the darling of British society, was sentenced to two years hard labor at Reading Gaol for “gross indecency” — even though there was no evidence

other than some love letters of his to Bosie, the young Lord Alfred Bruce Douglas, son of the homophobic John Douglas, 9th Marquess of Queensberry. Eventually, Wilde was allowed pen and paper in prison, where he composed one of the most moving letters ever written by a man to his young lover — “De Profundis (From the Depths).”

To this day, people are traveling to the Père Lachaise Cemetery in Paris to pay their respects to Wilde who, penniless and unknown, only 46, died of cerebral meningitis, in Room 16 at Hôtel d’Alsace — deserted by his lover, who did not want to be disinherited by his wealthy, albeit ruthless, father.

Not everyone, though, knows about the 27-year-old Wilde, who — wealthy, intelligent and with a tremendous desire to make a big name for himself — went on a tour through the United States, giving well-attended lectures on art and literature, determined to meet as many famous American writers, including Walt Whitman, so that he could not only bask in their glory, but also learn from them.

America’s oldest theater with the world’s largest subscriber base, the Walnut Street Theatre just premiered “Mickle Street” by Philadelphia playwright Michael Whistler, which features the encounter between the rising, if young, Wilde (Daniel Fredrick) from Britain and America’s seasoned and much-discussed Walt Whitman (Buck Schirner), then 62, at his house on Mickle Street in Camden, N.J., on Jan. 31, 1882.

Right from the beginning of the play, we see Wilde reflected through the eyes of Gilbert and Sullivan, the famous Victorian writers of operettas that had become big-box office successes both in the United States and Britain. Mary (Sabrina Profitt), the widow who looks after Whitman, sings this musical caricature of Wilde, the upper-class dandy from the popular Gilbert and Sullivan operetta “Patience:” “Conceive me if you can/A Bombty-bomp young man/So ultra poetical/so etty-quette-tetical/Out of the way young man.”

Shortly thereafter, the tall and handsome Wilde arrives at Whitman’s humble and overcrowded home, dressed to the hilt with his famous fur coat and pantaloons, looking like a Victorian male Madonna at a gala.

Unlike the American singer, Wilde plays the poetic wild card: “I come as a poet to call upon a poet,” he proclaims at his arrival — to the delight of audiences who experience a battle royale between the poor and aging American star among poets: the wild young Wilde, who made up his lack of experience with panache, and Mary, the simple Irish-American soul with great convictions that clash with both men and their lifestyles, at least the way she sees them.

She warns Wilde about Whitman’s predilection for working-class young men, including the famous Pete Doyle, a streetcar conductor whom she calls “the trolley man,” one of Whitman’s favorite companions:

“Sailors, peddlers, soldiers — ah! An 18-year-old boy he gave a ring to. I thought to put [these images] aside as company was coming. It appears I needn’t have bothered. T’isn’t natural. It’s an inversion. But the man is what he is, and my hiding a few photographs won’t change that. He’ll tell you it is all a part of his ‘cosmology,’ that it is a part of a ‘new country of comrades.’”

Seconds later, reflecting on Wilde’s effusive behavior toward Whitman, the old widow issues a warning: “So you be sure you know where you might end up when you start into flattering and flirting and all this ‘cosmology.’ When he’s got his rand up I can smell it on him like a perfume. With all your talk of jardinières and amarylli, yer a fancy boy yourself.”

When Whitman returns from the kitchen with a “working man’s treat — Milk punch!” (whiskey and milk), Mary stiffens her back and leaves the room, with Whitman buddying up to the young Wilde: “Well. We’ll continue, just us boys then. We two boys together clinging, one the other never leaving, up and down the roads going.”

Wilde plays along and brings up the controversial “Leaves of Grass” collection that he had read in London, quoting Whitman’s references to “manly attachment,” “adhesive love,” “love of comrades” and “the life that does not exhibit itself.” Some moving discussions ensue, including one nasty review that describes the content of the poetry collection as “a sin so vile that it is not spoken by Christians.” Little did Wilde know that he would be accused of a similar crime, end up in prison and, shortly thereafter, die way before his time.

Whistler’s new play, based on historical facts and imagined conversations between two famous writers (directed by Greg Wood), opens new doors, shows an insecure young Wilde who seems to hide behind “aesthetics and art” while Whitman teaches Wilde more than he might have bargained for, advising him, “Go see America. Go see the world. Find out what creature you are. And for all the frippery — be honest. With us, and with yourself.”

Henrik Eger, Ph.D., playwright and editor of www.DramaAroundtheGlobe.com, originally from Germany, studied and taught English in England for many years, and now resides in the Philadelphia area.