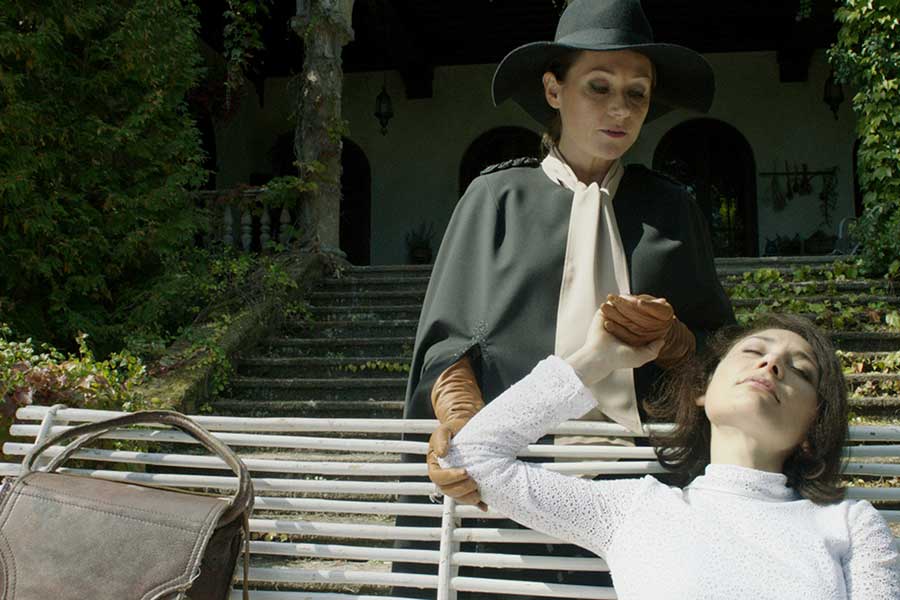 The Venn diagrams of lesbians, S&M practitioners and lepidopterists overlap in “The Duke of Burgandy,” writer/director Peter Strickland’s distinctive, ecstatic and arch-romantic drama. The film takes its visual cues from 1960s and ’70s European arthouse softcore — think Radley Metzgar — and its aural cues from butterfly sounds to soap bubbles popping.

“You’re late,” Cynthia scowls, and brings her maid into the living room. “Did I say you could sit?” Cynthia asks, when Evelyn positions herself on the couch.

“You can start by cleaning the study,” the mistress commands, adding, “And don’t take all day this time.”

“The Duke of Burgandy” plays out this and other S&M scenarios, and not just for the dark amusement but to emphasize the power positions of the lovers. Evelyn admits she is grateful to be “used” by Cynthia, who is all she ever dreamed about but never thought she would find. While Cynthia is anxious to please her lover, the film shows her veneer starting to crack.

Evelyn’s happiness depends upon Cynthia’s unhappiness about her skills at boot-polishing, panty-laundering and house-cleaning, and then chastising her for it. In bed, Evelyn is aroused not by her lover whispering sweet nothings to her, but by Cynthia giving her a verbal spanking. When she pleads to Cynthia to use “more conviction” in her stern reprobation, it is both funny and telling.

One of the film’s best sequences involves Evelyn meeting a female carpenter (Fatma Mohamed), who describes a bed that allows lovers to sleep on top of one another, noting it takes eight weeks to construct. Evelyn is disappointed at the wait, but becomes more enthusiastic when the carpenter tells her about another product, a human toilet. Such moments are among the film’s charms.

The actors’ superb, controlled performances make the film so captivating. That they rarely break character is part of the film’s fun. When Evelyn expresses disapproval about Cynthia wearing comfortable clothes, or an act of betrayal is discussed, these moments are likely a lover’s spat. However, they may be part of the couple’s role-playing; the ambiguity is quite delicious. Likewise, the film’s narrative — which repeats images and includes several hypnotic sequences, such as one that begins and ends with zooming into Cynthia’s dark crotch — suggests various interpretations.

“The Duke of Burgandy” is a film about precision that is itself precisely made. The shots of pinned butterflies underscore the dominant/submissive relationship between the women, who are often reflected in glass and mirrors. There are voyeuristic scenes of Evelyn looking through a keyhole to see Cynthia getting dressed, which mirror Evelyn looking at a specimen under a microscope. (The title “The Duke of Burgandy” is the name of a species of butterfly). And there are shots both discrete and explicit of the women’s lovemaking.

There are also several episodes in which various women, Cynthia included, lecture about butterflies. The all-womenaudience includes a mannequin or two, in another of Strickland’s offbeat cues to viewers not to take things too seriously.

As the film builds to its dramatic climax, the lovers discuss their relationship more honestly. “It would be nice if you did it without having to be asked,” each of them says, Cynthia referring to getting a massage for her injured back, while Evelyn wants her lover to lock her in the trunk at night.