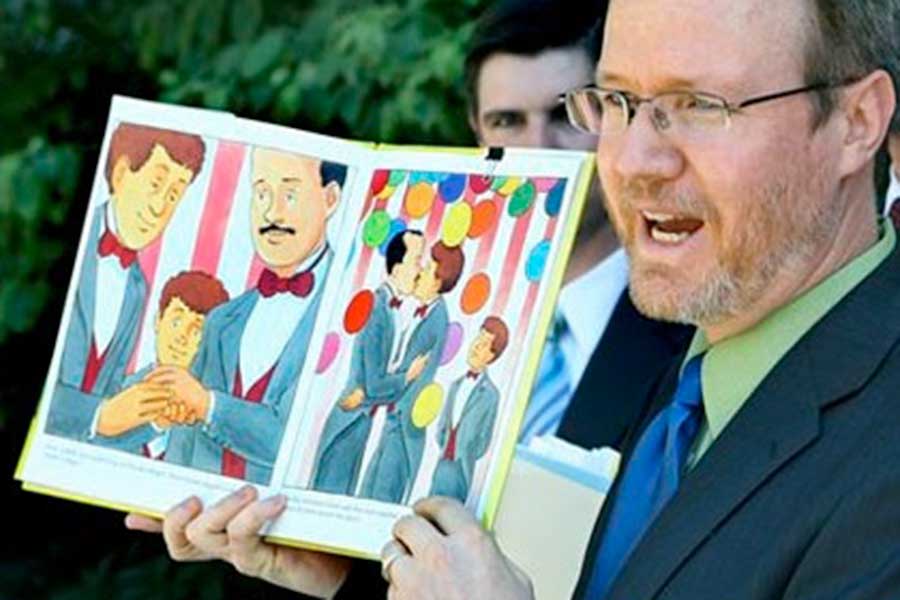 Desperate times call for desperate measures, and these are desperate times for antigay “marriage defenders” like Randy Thomasson of Save California, an organization dedicated to children and families — just not gay ones.

On Jan. 7, Thomasson sent an “urgent” memo to fellow “pro-family leaders” that laid out the “solution” to the gay-marriage problem. And it’s a doozy.

You see, all one-penis+one-vagina-marriage advocates need to do is get like-minded governors in gay-unfriendly states to roll out the National Guard.

“Each governor pledges themselves to ‘support and defend’ the plain words of their state constitution, including, in morally conservative states, the definition of marriage as only for a man and a woman,” Thomasson writes. “And each governor is authorized to call out his/her state’s militia or National Guard to enforce written laws and maintain public order against foreign and domestic enemies.”

Not sure if homos count as foreign or domestic to Thomasson, but they definitely count as enemies. And the only way to “support and defend” the anti-gay-marriage amendments in state constitutions is to take them out. The homos, not the amendments. Duh.

So what’s a right-wing stalwart governor to do? Why, just follow Thomasson’s step-by-step plan, of course.

“In view of the current crisis on marriage, a constitutional governor can and should do the following,” Thomasson writes. “Announce he took an oath to obey the constitution, not to obey a judge’s unconstitutional opinion. Announce that no homosexual ‘marriage’ licenses will be issues [sic], and no county clerk is permitted to issue marriage licenses to anyone other than a qualified man and woman. Utilize the support of the state attorney general (if that constitutional officer is willing to stand alongside) or use the state’s National Guard to enforce the law at county clerk’s offices.”

Hey, remember when Arkansas Gov. Orval Faubus deployed the National Guard in 1957 to stop nine black kids from going to school in Little Rock? I don’t know why, but I just thought of that for some reason. Something tells me that Thomasson sees Faubus as a hero, while history remembers Faubus as racist scum.

Now, you might be thinking, What about the law? Aren’t anti-gay-marriage amendments being struck down everywhere?

Well, yes, but the law is for losers, according to Thomasson.

“[G]overnors who are loyal to the written constitutions of their state and our nation must take executive action, instead of making excuses that they must ‘follow the law,’” he writes. “The claim that judges make the laws is both a fallacy and a misnomer, and is antithetical to a republic. The law is written into the constitution by the people or the people’s representatives; the law is not what judges dream up, which is only their biased opinions.”

Got that? Governors who follow that law are just “making excuses.” Judges are just a bunch of biased dreamers, forcing us all to live in their homosocialist dream (read: nightmare) world. So much for checks and balances.

Oh, wait. That’s Chris Crocker. I always get him and constitutional governors mixed up.