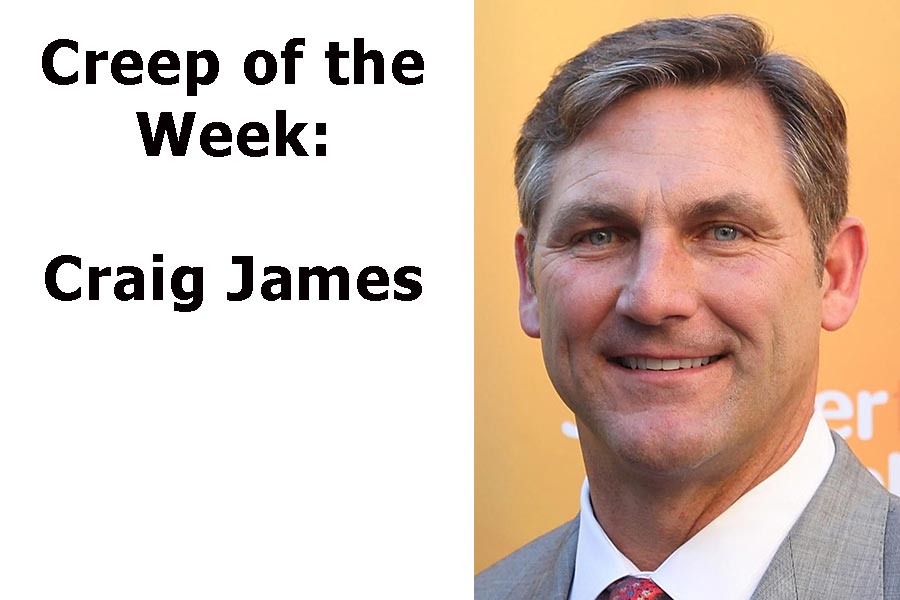 People who think two guys kissing or two women same-sexing is really icky and makes Jesus cry don’t typically say that gays and lesbians should be killed. Prayed for? Check. Sent to an ex-gay camp where they can find it in their hearts to swap partners and live in one-man-one-woman matrimony? Check. Be discriminated

against in employment, housing and public accommodations? Check, check and check.

But even the most loony of the right-wing antigay set can’t expect to get much traction with a “kill ’em all” approach.

So when a guy identified as “Phillip in Arkansas” calls up the Washington Watch radio show and advocates for that very thing, host Craig James of the Family Research Council should be outraged or at least definitively nip that idea in the bud.

“I want to say something very horrific, a solution, and I think it’s the right solution,” Phillip says. “We pray for the homosexuals, we’ve prayed for our enemies, but at the same time when they try to force us to go against God, I think that’s where they cross the line, and we should pass laws to execute them when they have judges to go against our businesses.”

Wow. Tell us how you really feel, Phillip. Note that when he says “go against our businesses,” he’s referring to the poor Christian business owners who are forced to do nasty things like bake cakes for a gay couple’s wedding.

So let’s be clear: According to Phillip from Arkansas, the two men who filed a complaint against the Masterpiece Cakeshop in Colorado for refusing to make them a wedding cake should be executed. For having the gumption to complain when the business defied state law. And because they loved each other. And because they wanted cake. They should be killed.

Phillip continued, “I’m sorry. I will pray for them in the meantime, but I know that’s horrific, and God forgive me if I’m wrong.”

Aww, how sweet. Phillip will keep praying for homos “in the meantime,” which means, “until we get to kill them.” And I appreciate his little shout-out for God to forgive him if he’s wrong. Except he’s already said this is the “right solution,” which sounds a lot like a certain “final solution.”

So how does James, former footballer, sportsball announcer and failed Texas Senate candidate, react to this “horrific” nonsense? Does he rail against Phillip’s ignorance and hatred and point out that Jesus is pro-love-your-neighbors and the Bible is all thou shalt not murder?

“Thank you, Phillip.” James says. “Uh, you know what, that part there, uh, I don’t know about the executing … “

Wait, he doesn’t know about executing? Like, he’s on the fence? Like, “Gosh, I’ll have to give that some thought because it’s an idea worth entertaining”?

Oh, is that right? God doesn’t want you to be timid, eh? About your beliefs?

Roll the tape: “Uh, you know what, that part there, uh, I don’t know about the executing … “

Standing real “bold and firm” for his “straight beliefs” there. I’m sure God is super proud.

James continues, “There have been lots and lots and lots of men and women who have died for their Christian beliefs since the beginning, and now we are in a time in this country and in this world where we must be bold and stand for God and His truths.”

Notice that he turns the conversation from “Christians should kill the gays” to “Christians have died for their beliefs,” even though nobody’s advocating killing Christians here, not even the homos who want wedding cakes from Jesus-loving cake shops.

And again with this “be bold” shit — after completely failing to address the disgraceful idea of executing gays after it’s just been posed on his radio show.

Then again, this is the guy who said in 2012 while running for office, “People choose to be gay [and] they’re going to have to answer to the Lord for their actions.”

And if “the Lord” comes in the form of Phillip from Arkansas dressed as the grim reaper? Well, we’ll just have to bow our heads and remember the “lots and lots and lots of men and women who have died for their Christian beliefs” and call it a wash.