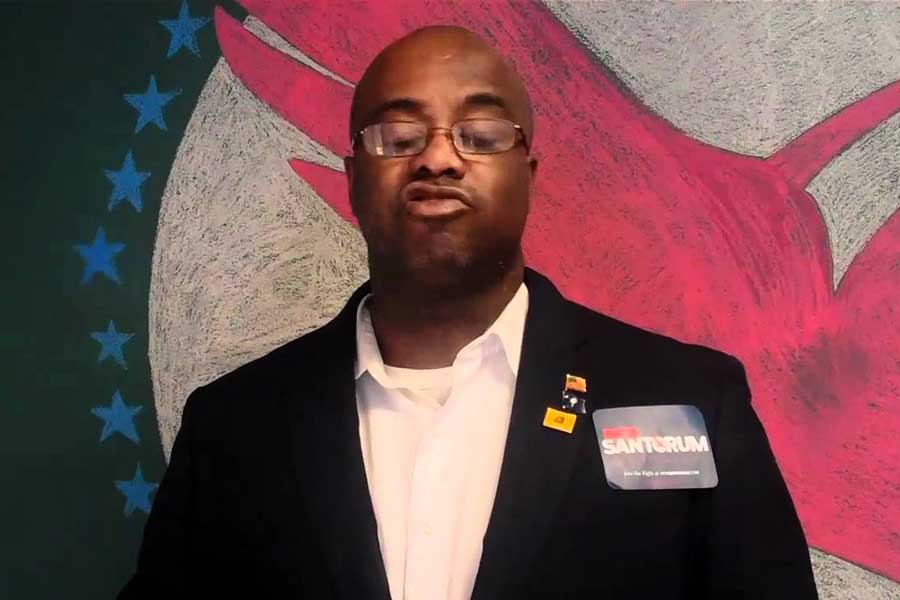 LGBT people aren’t covered under Michigan’s anti-discrimination law, meaning you could, for example, be fired for being gay and your employer would be perfectly in his or her rights. Your legal recourse would be, to use a technical term, jack shit.

For a minute it looked like that might change. The Michigan House was poised to vote on a bill to add sexual orientation (but not gender identity) to the law. The Commerce Committee heard testimony about the bill, including the testimony of Stacy Swimp, president of the National Christian Leadership Council.

Before he began speaking, he promised to shorten his remarks so that he would not “regurgitate” what others had already said during the hearing. “Regurgitate” was an excellent word choice, since his words were basically ignorant hate vomit.

“This proposed legislation is yet another step in the assault on religious freedom,” Swimp began. “I ask the Commerce Committee today, and the Michigan legislature, can you begin to clearly define sexual orientation? Do you truly know what you are potentially aligning yourselves with?”

Swimp doesn’t attempt to answer these questions, though I can’t help but guess that he has some sinister picture in his mind of lesbian sister wives triple-gay-marrying during a Wiccan handfasting ritual.

He says that protecting LGBT people from discrimination has “resulted in Christian churches, pastors and church members being discriminated against, fired, fined, expelled from school and pressured to violate their conscience and moral opposition to homosexual marriage and homosexual behavior itself.”

In other words, if we protect the queers, then there would be consequences for not discriminating against them, as such discrimination is a sacred right for Christians.

As examples he uses Julia Ward, an Eastern Michigan University student who was expelled from the counseling program after she refused to counsel a gay kid on the grounds that her religion forbade her from treating gay people like human beings deserving of compassion. He also refers to Crystal Dixon, fired from the University of Toledo after writing an antigay op-ed in the Toledo Free Press. Both of these women, as he makes sure to mention, are black.

Which is important because civil rights are only for black people, obviously.

“As a minister of the Gospel, and as a black American whose parents participated in the Freedom Rides — my ancestors were slaves in plantations in the states of South Carolina, Arkansas, Tennessee, Indiana and Mississippi — I [sit] here today rather offended.”

As he should be! I mean, who wouldn’t be offended while recounting his family’s direct connection to our nation’s deep racist history? Not to mention the continued oppression of people of color in America.

“Lesbian, homosexual, bisexual and transgender Americans have never been denied their voting rights, nor have they been denied the right to assemble,” he continues. “No one from the LGBT community has ever had fire hoses turned on them by the police department, they have never had to drink out of an LGBT water fountain. There is no public record of LGBT [people] being forced to sit at the back of the bus in an LGBT section. Black Americans were publicly lynched and specifically excluded from moving into neighborhoods, prohibited from sitting on a jury and denied the right to sue others.”

I doubt he sees the irony in mentioning being denied the right to sue considering he is, in fact, arguing that LGBT people should continue to be denied the right to sue for discrimination. But he is right — the black civil-rights movement and the LGBT civil-rights movement have been different in some ways, and the treatment of black people in this country has been deplorable and continues to be.

But using that history as evidence to support discrimination against gay people is wrong. Swimp apparently thinks that civil rights are a rare commodity and there just aren’t enough to go around; he’s pitting black people and LGBT people against each other as if there is no overlap between the two groups.

There’s a whole lot of hate to go around in this world. More than enough. If no one is free while others are oppressed, those who want a pass to oppress others are in a jail of their own making.