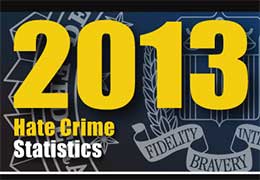 According to statistics released by the FBI Tuesday, there were no hate crimes motivated by a victim’s sexual orientation or gender identity committed in Philadelphia in 2013.

The data comes from the FBI’s Hate Crime Statistics 2013 report, which documents bias-motivated incidents. Pennsylvania’s hate-crimes law does not include protections based on sexual orientation and gender identity, but new federal guidelines encourage optional tracking of such incidents.

Nationally, there were 5,928 incidents in 2013 reported from 1,826 law-enforcement agencies, up from 5,796 the previous year. There were 1,233 incidents motivated by a victim’s sexual orientation, compared with 1,135 in 2012. The sexual orientation-related crimes comprised about 20 percent of the overall incidents, second only to race. There were 31 incidents motivated by a victim’s gender identity reported nationally in 2013, 23 of which were categorized as anti-trans, and eight of which were anti-gender-nonconforming.

In Pennsylvania, sexual orientation was the third most-common motivator; there were 44 race-related incidents, 11 motivated by religion and one by ethnicity. Of the eight incidents related to sexual orientation, three were committed in Pittsburgh, three in Reading, one in University Park and one in Skippack County.