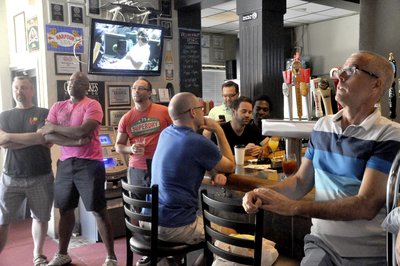 The first rugby match featuring a gay team versus a professional team, on July 6, came out as we had hoped and cheered for, with the Sydney Convicts beating the Macquarie University Warriors 30-12. This historic curtain match between the NSW Waratahs (AUS) and Highlanders (NZ) at Sydney’s Allianz Stadium was part of a series of anti-homophobia initiatives led by Australian sporting organizations in partnership with organizers of next month’s Bingham Cup, the world cup of gay rugby, being held in Sydney. This includes the first international study on homophobia in sports, which is collecting experiences of people in other countries.

International rugby superstar and former Wales captain Gareth Thomas is one of only two professional rugby players to have come out of the closet. He said, “I congratulate the Sydney Convicts for winning this historic game. It certainly says a lot about the caliber of gay rugby teams around the world. Thankfully, we are moving incredibly quickly toward attitudes changing about gay people and whether they can play tough sports like rugby. This may be the first gay team invited to play a curtain raiser but I hope it’s not the last.”

The gay-straight rugby match intent is to battle homophobia and raise money and awareness for next month’s Bingham Cup tournament. The bi-annual event is a sanctioned tournament named in honor of Mark Bingham, a 9/11 hero who lost his life on Flight 93 and who was a rugger playing on the San Francisco Fog RFC.

Philadelphia Gryphons RFC is ready for the cup challenge. So far, 15 ruggers have signed on to go and there’s still some time for a few others to get into the fray. Bingham Cup Week is Aug. 24-31, so if you would like to hang with these guys before they depart, the next rugby boot camp and Saturday social is Aug. 2. Boot camp starts at noon at George Pepper Middle School and the social part is in the afternoon and evening at Westbury. Bring an extra dollar to donate to the cause.

Fundraising continues up until departure because a trip to Sydney for a week is no inexpensive proposition. If you can part with $5, $10 or more, go to philadelphiagryphons.org/ donate and help send a rugger down under.

As mentioned in the first paragraph, the organizers of Bingham Cup Sydney 2014, in consultation with the Sydney Convicts Rugby Club and the International Gay Rugby Association and board and in partnership with the You Can Play Project, are working on the most extensive research on sports homophobia through the survey project “Out on the Fields.”

So far, there have been more than 5,000 responses worldwide with a 10,000-person goal. But, curiously, they are far short on responses from the United States. The survey, analysis and final report are being overseen by internationally respected and leading experts on homophobia in sports at six universities and include Sue Rankin of Pennsylvania State University and Pat Griffin from the University of Massachusetts.

The study is at outonthefields.com and takes only a couple of minutes of your time, and provides invaluable information. Pass it on and then get out and play!

• Time is running out to get your Phillies tickets to the Gay Community Night Aug. 5. To sit with your buds or gals, go to phillygaydays.com. And screw the fact the Phillies are losing three out of every four games. Their record for Gay Night is even more dismal at 1-10. Just come have fun!

Countdown to Gay Games 9: 28 days. Summer home and summer not, what is your group doing this summer? Email [email protected].