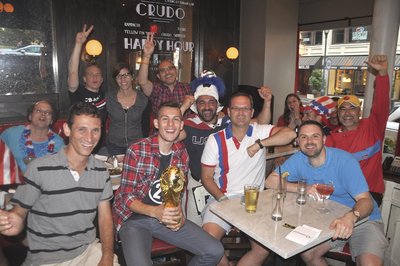 There are still a couple of weeks left in the FIFA World Cup, and I admit I am enjoying watching it even though I’m not that savvy about soccer. I’m the same way with rugby. Of course, all three are football depending on where you start learning your sports, and yet for some reason American football bores me.

Perhaps the difference is that, with the first two, there is constant play, running, passing, scrumming, kneeing and whatever else they do, and with our football it’s grunt and collide, run or pass for eight seconds, then sit and wait five minutes for another rock ’em-sock ’em six seconds of play.

And people say baseball is boring.

I have learned a few things about soccer this summer just by paying attention and remembering bits and pieces as the matches proceed. (By the way, they are called matches, not games?)

The International Football Association Board currently acknowledges 17 laws of soccer that are the standard for any professional or international match played. Seventeen? Could it be any simpler?

One of the other cool things about the World Cup is rooting for Team USA. It’s kind of like the Olympic hockey team, where it doesn’t matter who does what exactly, just that we win as a nation. Besides, I haven’t a clue as to what stats one might follow in soccer besides the number of goals made and the number of times someone has been kicked out of a game.

I’ll get the hang of this yet.

Of course, once this quadrennial event concludes, you may still have a soccer buzz. That’s where the Philadelphia Union comes in. This Chester-based organization plays at home two to three times per month. Tickets run around $30 and the season continues into October; www.Philadelphiaunion.com.

Our Philadelphia Falcons have a new opportunity for all of us new soccer-curious people. They have initiated a Falcon Fledglings skills practice for beginning soccer players 5 p.m. every Sunday at Edgely Fields. No skills required. Anyone want to join me this week?

If you have some seasoning already, summer league begins July 9 and goes through Aug. 27 and, of course, there are always the Tuesday and Thursday pick-up games. Registration is open on their website (www.falcons-soccer.org) and new members get $10 off if you use the promotion code PRIDE.

Short stops • Philadelphia Soul celebrates the fans with an appreciation day 4 p.m. July 20 with thousands of dollars in giveaways, plus the first 3,000 fans receive a 2014 team poster and the first 5,000 receive a T-shirt courtesy of Parx Casino. Discounted club-box tickets are $25, a $20 savings. It’s the last regular-season home game and you could go home with a 70-inch HDTV! • The annual Liberty Belle Bowling Invitational continues its Independence Day weekend tournament July 3-6; Libertybelle.org. • Philadelphia Liberty Tennis Association is having a Wimbledon breakfast 9 a.m. July 6 at Westbury. Come commiserate and get some more information about the upcoming Philadelphia Open, July 18-20; plta2014.ning.com.

Countdown to Gay Games 9: 42 days. Summer home and summer not; what is your group doing this summer? Email [email protected].