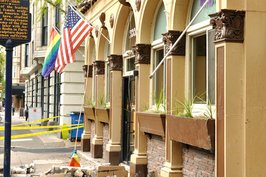 A portion of the front of ICandy Nightclub has crumbled into the street, after strong storms swept through the region.

Bricks from the second-floor facade were scattered out front of 254 S. 12th St. early Thursday morning. Police were on scene and the front of the building was roped off.

A call to club management has not yet been returned. There is a “no admittance” sign on the front of the building; it is unclear if ICandy will be open for business Thursday.