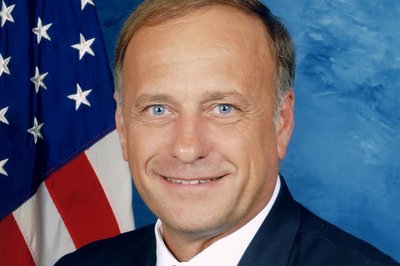 There comes a time in every thinking person’s life when he or she has to take a serious look in the mirror and say, “I live in a country where Steve King represents thousands of people in Congress. ”

It’s a hard thing to do. And with good reason. King (R-Iowa) has a long, sordid history of being antigay, anti-immigrant, anti-Muslim, anti-reproductive rights and basically anti-critical thinking.

So it’s no wonder he was sad about Arizona Gov. Jan Brewer vetoing a bill that would have allowed anybody with a “religious” objection to deny service to gays and lesbians or, really, anybody they thought was some kind of queer so long as they felt that God was personally instructing them to be assholes.

In a recent interview with WHO TV, King lamented the fact that gay people continue to be allowed to buy, have and eat cake.

“When you’re in the private sector and you’re an individual entrepreneur with God-given rights that our founding fathers defined in the Declaration, you should be able to make your own decisions on what you do in that private business,” King declared.

In other words, just because you open a business doesn’t mean you should be forced to do business with people God tells you to hate. (For reference: See the lunch counter sit-ins during the 1960s and how well that worked out for everybody.)

King continued, saying he was “uneasy” that just “because you have a door that’s open that anybody can walk in, that doesn’t mean that you have to perform any kind of service that they demand.”

Well, who can argue with that? I mean, if I walk into a tailor’s shop and demand that he make me a cake for my big gay wedding, why, I wouldn’t blame him one bit for refusing me. It’s when I want to have a dress altered and he says, “No homo” and points to a cross pendant around his neck as evidence that I am not worthy of his precious needle and thread that I have a problem, because that is some fucked-up bullshit to use a legal term.

“It’s clear in the civil-rights section of the code that you can’t discriminate against people based upon, and I’m not sure I have the list right but, race, creed, religion, color of skin, those kinds of things,” King continued. “And there’s nothing mentioned in there on self-professed behavior, and that’s what they’re trying to protect: special rights for self-professed behavior.”

“The one thing that I’ve referenced when I say ‘self-professed’ is: How do you know who to discriminate against?” King asks. “They have to tell you.”

So if gays and lesbians would just STFU already and get back into the closet where they belong, no one would have to go through the trouble of discriminating against them.

As far as discrimination protection goes, King says, “If it’s not specifically protected in the Constitution, then it’s got to be an immutable characteristic, that being a characteristic that can be independently verified and can’t be willfully changed.”

Using King’s logic, if homosexuality isn’t worthy of protection because there’s no way to “prove” that someone is gay and not, like, just pretending or something (because that’s a thing, apparently) and it can be changed (i.e., “prayed away”), then what does that mean for religion? Isn’t the very definition of religious faith that it can’t be proven but you just believe anyway? And what to make of the fact that King’s Wikipedia page states, “[R]aised a Methodist, King became a Catholic, his wife’s faith, several years after marrying her.”

By King’s own criteria, religion is the most self-professed of all protected classes. So forgive me if I bristle at the idea of my civil rights being trumped by someone else’s imaginary friend.