A new study conducted by Ann P. Haas and Philip L. Rodgers of the American Foundation for Suicide Prevention and Jody L. Herman of UCLA Law School’s Williams Institute forges an important link between suicide attempts by transgender people and the discrimination they face.

Specifically, the National Transgender Discrimination Survey, or NTDS, states that 78 percent of those who had suffered physical or sexual violence while at school attempted suicide. Further, 65 percent had attempted suicide after suffering the same at their workplace.

The study covered more than just violence in workplaces and schools: It showed that 57 percent of transgender people who were rejected by their family attempted suicide, as did 69 percent who had ever been homeless, 60 percent who were refused treatment by a doctor and 57-61 percent who had been disrespected or harassed by a member of law enforcement.

Let’s step back and put this in context, by way of a study from October 2010, conducted by the National Center for Transgender Equality and the National Gay and Lesbian Task Force. Their findings showed that 41 percent of transgender people in the United States have attempted suicide; this is almost nine times the national average.

It is with no pride that I say that while I am not in that 41 percent who attempted suicide, I most certainly have been very close on more than a few occasions. I’ve been lucky, nothing more, to not be part of this statistic.

I have also had a great many transgender friends who have attempted suicide, and a handful or so who were successful.

To be frank, I don’t think I needed this study to tell me that transgender people are more likely to attempt suicide based on the discrimination and ill treatment we may face. This link seems brutally obvious.

It is damned hard to be transgender in this society. We live in a culture that is very rigidly gender-divided. We segregate the lives of our children from before birth, selecting pink or blue from the first ultrasound while holding “gender-reveal parties” to share the news with family and friends. Everything from womb to tomb is built around a notion that we’re either one or another, and we must live up to sometimes-unrealistic expectations around same.

Transgender people in this culture are treated as something that everyone is free to mock and everyone is allowed to hate. To some, we’re “traps,” existing only to somehow turn straight people queer — and deserve all the hate, derision and violence sent our way.

I am of the belief that it is gender that lays at the heart of not only the discrimination that transgender and gender-nonconforming people face, but the same core lies at the heart of homophobia. It is not the sexual practices that create an aura of fear, but the sense that they will be viewed as somehow less a member of their gender for having a same-sex attraction.

That notion that we are cruel deceivers lays at the heart of every cliché Hollywood has foisted on us, from “The Silence of the Lambs” to “Mrs. Doubtfire.” The only reason, according to the mass media, for a person to appear as the opposite sex is for some illicit gain.

That is when they’re not trying to tantalize the audience with stories about our genitals and what they may or may not look like.

Those who try, again and again, to thwart transgender rights, particularly surrounding public accommodations, tell anyone who will listen that we’re akin to rapists and molesters aiming for your wives and daughters in the ladies room, ignoring that we — like nearly everyone else — merely want a safe, clean place to go to the toilet.

When we’re not viewed as deceptive, we’re presented as some form of tragic disability. We are disordered, a victim of gender dysphoria. We’re not to be feared, it would seem, but rather pitied for the cruel fate that is our lot in life. That we are suicidal is simply part and parcel of us poor dears being in a body that does not match our spirit.

Hogwash. If there is one clear thing from this most recent study, it is not that being transgender drives us to suicide; it is the discrimination and violence we face for being transgender.

As I noted above, every time transgender people face physical or sexual violence at school, there’s a 78-percent chance they will attempt suicide. It’s not being transgender that is causing that, but the way they are treated by others for being transgender.

This is why bills like California’s AB 1266 are so vital. This is not about peeping toms in bathrooms, but about affording transgender and gender-nonconforming students equal footing in schools.

This is also why the story of Dr. Essay Anne Vanderbilt’s outing by writer Caleb Hannan — and her subsequent suicide — was such a blow. We do not know for sure that one led to another, but we do know that Vanderbilt had attempted suicide prior, and we can infer that this report outing Vanderbilt to an investor — and telling her that he was going to take her story public — certainly could not have helped matters.

I wish this was not such a radical notion: that if you do not discriminate against us, and let us live our lives on an equal footing, a lot less of us show up dead. The findings of the NTSB should be obvious and very much common sense.

It’s high time that transgender people were given a fair shake.

Gwen Smith still misses many great people, lost along the way. You’ll find her at www.gwensmith.com. 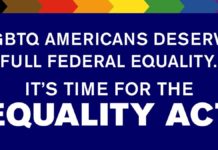