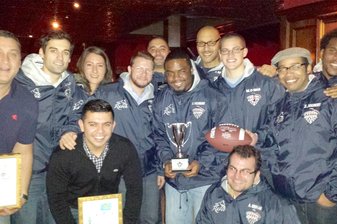 Major-league sports aficionados know the significance of having a strong home-team fan base. The Phillies crowd is sometimes referred to as the 10th man. In a football game, the fans are the 12th man. In either case, the reference and evidence suggest that having the support of fans is like having an extra-player advantage. Supporting your team sport in some way other than wearing a jersey and snapping on the cable box sometimes means being part of the crowd and cheering in person. It gives the athletes, spectators, sponsors, staff and decision-makers something tangible. And it can make a difference.

The final at-home competition of the recently terminated Temple gymnastics program is Feb. 15. There are still regional battles in Piscataway, N.J., and Collegeville and, while there is still the East Coast Athletic Conference championship on March 22, this is the last time we have a chance to be visible at a regular meet at Temple. Then there’s Circus Warehouse in New York that understands the need for this excellent program and is hosting a tumbling workshop fundraiser for TUG on Feb. 16. For more information, visit circuswarehouse.com/2014/save-temple-university-gymnastics/.

Consider the future of U.S. Olympic gymnasts if this program and others like it across the country are gutted for whatever rationale the powers-that-are give so they can sleep at night. What happens to the summer games if potential talent is lost in gymnastics or any other sport? Where will our younger LGBTs get inspired or enticed by the raw athleticism?

The excitement starts at 1 p.m. in McGonigle Hall, 1800 N. Broad St., in just three weeks. I hope you’ll join me and some friends and make an out-and-loud support group for TUG that Saturday. More information is at owlsports.com/index.aspx?path=mgym#.

From hot gymnasts to hot swimmers …

Not so dire, yet no less deserving of some Philly support, is the Fins Aquatics Club. They are participating in the nationwide Postal Swim fundraiser from 10 a.m.-12:30 p.m. Jan. 25 at Friends Select School, 1651 Benjamin Franklin Pkwy. It’s called the Postal Swim because when it originated years ago, the results were mailed in and competitors didn’t find out how they fared until weeks later. Now it’s mere days for results, or whenever everyone has their data uploaded. This annual event raises operating income for the organization and also for a chosen beneficiary. Last year money went to The Attic Youth Center and this year the pledges will be shared with the American Cancer Society in memory of recently deceased Fins member Dennis Clegg.

If you would like to pledge to the team or an individual, forms are on the Fins’ website at philadelphiafins.org/postalswim.php. Better yet, join me Saturday morning and cheer on your favorite Speedo-clad swimmer!

The Fins celebrate 25 years as an organization this year.

Brainchild of GG9 and others, international Pride Houses are beginning to pop up in cities across the world in protest of Russia’s antigay policies. Pride House has been a staple of recent Olympic ventures, giving LGBT athletes a “safe space” in which to relax, share, laugh and teach tolerance.

The new concept is simple: Create local Pride Houses as a show of solidarity and bring LGBT communities together to share the Olympic experience. Philadelphia’s own version will be at the William Way LGBT Community Center, kicking off with the opening ceremonies on Feb. 7. Screening and snacks will be included.

Short stops • Greater Philadelphia Flag Football League has a Gay Bowl XIV fundraiser starting at 5 p.m. Jan. 25 at Stir. It’s a Texas Hold’em tournament with a $25 entry fee and a maximum of 50 players. Register by emailing [email protected] Spectators wanted too! • Sports and recreation listings can be found on the inside back page of PGN every fourth Friday of the month!

Countdown to Gay Games 9: 224 days. There are many indoor sports to talk about in the winter, so if you know something about one of them you’d like shared, tell me about it at [email protected].