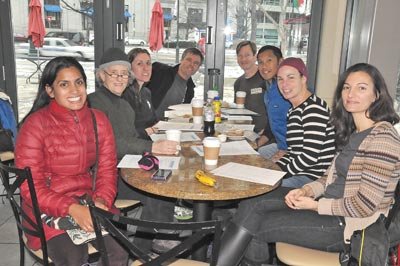 The Philadelphia Fins Aquatics Club board and officers had an informal baton-passing Dec. 14 at Café Cret on the Benjamin Franklin Parkway. It was also a strategy session for a busy and celebratory January.

Fins president Bob Breitel confirmed the annual Postal Swim would coincide with the organization’s 25th anniversary on Jan. 25. Details for the silver-anniversary celebration are still in the works, but plans seem to be going along swimmingly (pun intended).

The Postal Swim is one of the annual events the Fins participate inwhich they compete against swimmers from around the country. It also raises money for the team and a local nonprofit. Last year’s beneficiary was The Attic Youth Center.

The Philadelphia Fins Aquatics Club is a member of the United States Masters Swimming and the International Gay and Lesbian Aquatics. For information on the Fins, the party or to pledge money on one of the swimmers for the Postal Swim, check website philadelphiafins.org.

It was a pretty decent year for athletes coming out in 2013.

Outsports.com has a list of 77 athletes, coaches and sports writers who announced their gayness during this year, right up through last week’s Brian Boitano release. Each has an accompanying link to his or her announcement that the site posted previously.

A sadder note was the execution of some very important sports from Temple University’s curriculum (see “Temple and the moneychangers,” Dec. 13-19.) Bad karma is sure to follow that decision and you can show your support of at least the gymnastics team at thepetitionsite.com/798/504/911/save-temple-university-mens-gymnastics/.

Short stops • Kudos to President Obama for not attending the Winter Olympics next year and for asking prominent LGBT athletes to represent us there. • Team Philadelphia meets again on Gay Games initiatives at 7:30 p.m. Jan. 13 at the William Way LGBT Community Center. • You can find contact information for all LGBT sports groups in the area through the PGN sports listings on the inside the back cover every fourth week of the month.

Countdown to Gay Games 9: 252 days. Are you having a sports fundraiser, holiday party, bar crawl or strip-poker party? Tell me about it at [email protected].