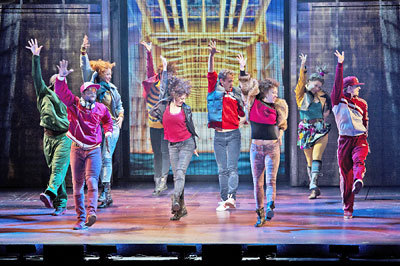 The hit songs, fashions and triumphant melodrama of the early 1980s come alive on stage with “Flashdance — The Musical,” Nov. 19-24 at the Academy of Music.

The stage adaptation of the hit film tells the story of Alex Owens, a Pittsburgh steel-mill welder by day and a bar dancer by night, with dreams of becoming a professional performer. The movie and soundtrack were a sensation when the film debuted 30 years ago, with songs and images that became classics if not iconic for that era.

Out ensemble cast member and dancer Austin Owen said that fans of the original film are eager to relive it on stage.

“I think because of the popularity of the film, it has that built-in audience,” he said. “People are coming to see the movie on stage. I think what’s great about the show is, whether you know the movie or not, you care about the story and the characters. It’s incredibly entertaining. It’s one of those shows where you are going to have a great time.”

Owen added that there is more to the stage show than what people saw in the film, as the stage version features new characters and songs.

“They definitely expanded the script and added some characters to adapt it for stage,” he said. “I think people will be pleasantly surprised. The leading man and the leading lady, their story is still the same. At the end of the day it’s about Alex and her dream and what it means to leap out and try to grab what’s in your heart. The added characters support her vision and her dream in a unique way that is not in the movie. In that way, the stage version is better, more well-rounded and fuller.”

Owen, who admits that he was a bit too young to appreciate (or even see) the film when it first came out, said his connection to the film came through the hit songs that the movie soundtrack launched.

“I was born in 1981. The movie came out in 1983. My first memory was of the music of the show. I grew up in Oklahoma and my mom was into jazzercise aerobics, which was huge in the 1980s. But I remember, instead of paying for a sitter, she would drag my brother and me to jazzercise. And we’d watch these women with their legwarmers going crazy doing jazz aerobics to this soundtrack. Those songs affected me more than the movie. I grew up hearing the music and loving the score. It’s hilarious for me to get into rehearsals and start learning the score and have those flashbacks of legwarmers and women dancing to ‘Maniac.’ It’s so interesting now to be older and look back to a period of time where those ’80s moments live on stage with me every night. And to think, Oh my God! I’m old. I’m in a period piece. It’s just so funny to me.”

The Kimmel Center presents “Flashdance: The Musical” Nov. 19-24 at the Academy of Music, 240 S. Broad St. For more information or tickets, call 215-790-5847 or visit www.flashdancethemusical.com.