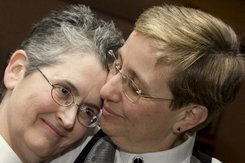 Barbara Baus filed a suit in Orphans’ Court of Northampton County Oct. 25, after being asked to pay more than $10,000 in inheritance tax on the estate of her late wife.

Baus married Cathy Burgi-Rios April 29, 2011 in Connecticut. Burgi-Rios, 55, died on Sept. 21, 2012 from complications from her year-long battle with leukemia.

The pair, together for more than 15 years, first married in a church ceremony in 1999 and also had a civil union in New Jersey. In 2001, Burgi-Rios, a New Jersey native, named Baus, who hails from Bucks County, as the executrix of her will and sole beneficiary of her assets. The two jointly owned property and had joint checking and savings accounts.

Following Burgi-Rios’ passing, Baus filed an Inheritance Tax Return with the Register of Wills of Northampton County, but was told by the state Department of Revenue that her marriage was “not valid in Pennsylvania.”

Heterosexual married couples are exempt from inheritance tax but Pennsylvania’s ban on same-sex couples means even legally married same-sex spouses are classified as “friends” in an estate appraisement and must pay a 15-percent tax.

Palmer said Baus is seeking to rectify the state’s discriminatory inheritance-tax law, as well as challenge the overarching state ban on same-sex marriage.

“She is seeking to have the state DOMA declared unconstitutional on state and federal constitutional grounds and if she is successful, it would be struck down,” she said. “As a minimum, she is seeking for the court to rule that same-sex spouses do not have to pay inheritance tax. They are essentially being treated the same as an unmarried couple.”

Baus said she’s ultimately looking for the state to respect her relationship.

At least three other lawsuits have been filed in as many months challenging the state DOMA.

Baus said the more legal challenges that are launched, the greater the likelihood that the state’s discriminatory laws will be overturned.

“I think we just need to start chipping away at these laws. I don’t think it will be across the board right away, but if we take each case by case, we will knock down these laws.”