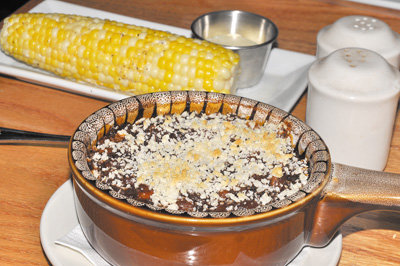 There’s an impressive kraken looming over the front door of the place. The whimsical undersea décor carries into the restaurant’s interior, which has a dimly lit but welcoming vibe.

Still, Headhouse is really going to have to bring it if it wants to compete with that other oyster place across town. And it certainly succeeded the night we visited.

The raw-bar selection is definitely on par with the better seafood restaurants in town. But it was the little details that hit the mark for us. Other seafood places can get lazy with the little dishes. One occasion that comes to mind is when we had a really disappointing clam chowder at another seafood establishment (that shall remain nameless, but it really should have known better). But Headhouse won our hearts with its soups.

The crab and corn chowder ($5) and the shellfish bisque ($5) arrived at the table thick, hearty and piping-hot. The chowder had some great texture thanks to the freshness of the corn. The bisque had a real depth of flavor. With the cold weather coming on, this place could make a mint on the soups alone.

Headhouse also put a lot of thought and care into the side dishes. The French fries ($4) and corn on the cob ($4) were memorably tasty. The baked beans ($6) hands down are the best we’ve had in town, with perfectly cooked beans and an excellent sweet, spicy and smoky sauce that we would love to steal the recipe for.

When it comes to entrees, Headhouse puts some interesting spins on some familiar dishes. The fried-oyster tacos ($12) were especially impressive, winning over diners at our table who don’t even like oysters. The oysters were chicken-fried, which gave a pleasant crunch to the tacos. The mahi mahi tacos ($11) aren’t the typical fish tacos, as the mahi mahi is not fried. That, along with the absence of any kind of slaw, amounted to an absence of the crunch factor necessary for a satisfying taco experience. But, if you are looking for a healthier alternative to the fried-fish taco, this version is worth checking out.

Let it be said that Headhouse makes some massive sandwiches, including some familiar choices with an inidvidual spin, such as the lobster grilled cheese ($14). The texture of the grilled cheese with the lobster and fried green tomatoes was ideal. The crab cake BLT ($12) is an interesting take on the sandwich, with a massive, but delicately fried crab cake backed up with some crowd-pleasing bacon. Both sandwiches come with Headhouse’s amazing fries.

There’s a new oyster house in town, and it’s quite the pearl.