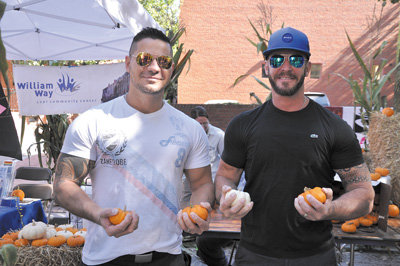 OutFest dodged the weather bullet this year and many of the local LGBT sports organizations were again represented on the sports-block portion of Spruce Street. Unfortunately, the volleyball demonstration I had so hoped to make the centerpiece of this column proved to not have been planned for the ladies to put on a quality street display and so didn’t happen. ’Nuf said. Revolution-ary progress

The Greater Philadelphia Flag Football League’s competitive division, the Revolution, headed out to Phoenix last week to compete in the annual Gay Bowl, slated for Philadelphia next year. Revs player Tom Ensminger said that about 15 players plus a handful of mates and friends went to the games this year.

Establishing themselves early, for the first time the Revs were pushed up into bracket A after years of competing in bracket B. While they did not have the greatest success at winning games, they definitely made the competition fierce, even keeping top-seeded San Diego tied at the end of the half. What the bracket change also means is that GPFFL now can field a second B team to play next year with this team.

At home, the rains of last Thursday and Friday soggied up the fields enough that play was suspended for the week, meaning no teams had to forfeit due to the out-of-town event, something that had caused some contentiousness when play was not postponed beforehand. That week will be added on in November.

Adding to the busy events of those games and OutFest participation, league commissioner Justin Dolci stepped down from the top spot Oct. 9. Citing four years on the board and the exhaustive work of securing the games in Philadelphia next year, plus new fields, Docli said the extra work had taken its toll.

Congratulations to the Revolution! We expect great things next year from both teams when the Gay Bowl is played “Where History is Made!” Gay Paree Word came down from on high earlier this month on the site for Gay Games X. Paris beat out finals contenders London and Limerick, Ireland, during a vote held Oct. 8 in next year’s Gay Games 9 host city of Cleveland. The vote tallies weren’t revealed but executive director Tom Nobbes predicted perfectly where the GGX would be held (Get Out and Play, Sept. 6-12).

If you’re not too athletically inclined, like myself, you can still attend and compete in the games. Two of the less-strenuous competitions are pool and darts. Yep. That’s right. You can compete in 8-ball or 9-ball for a medal. How gay is that?

If you’re interested in practicing either one of these sports, contact me through email. I’m looking for a practice partner. Just skating by

It’s time for another skating party to raise money for the annual Liberty Belle bowling tournament. Grab your in-line skates or rent them at the rink for $3. Admission is only $10 for two hours of skating, spills and chills. And by chills, we don’t mean the fall air — it’s the Halloween-themed skate, so don your scary gay apparel. Event will be 8:30-10:30 p.m. Oct. 21at Cherry Hill Skating Center, 664 Deer Road, Cherry Hill; philagayskating.com. Short stops

• You can find contact information for all of the sports and recreation activities at epgn.com/pages/bulletin_board and in the paper the third week of every month. Get Out and Play is online every other week under columns/Get Out and Play.

Countdown to Gay Games 9: 294 days. Send your sport and sports-related events and hot pics to [email protected]. And remember to get out and play!