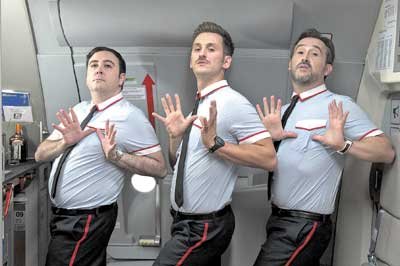 Oscar-winning gay filmmaker Pedro Almodóvar’s latest creation, “I’m So Excited,” is a buoyant comedy that is more in the spirit of his early farces like “What Have I Done to Deserve This?” and his breakout hit, “Women on the Verge of a Nervous Breakdown,” than his recent, more serious works. This new film opens with a text proclaims that everything that happens in the movie is fiction and fantasy; it bears no relation to reality. And viewers who take Almodóvar’s flight into fantasyland will enjoy themselves immensely.

On a Peninsula Airlines flight to Mexico, the three male flight attendants in first class — Joserra (Javier Cámara), Fajas (Carlos Areces) and Ulloa (Raúl Arévalo) — have to deal with a handful of frantic passengers when it is confirmed that the landing gear has a problem. As such, the plane is forced to circle around Toledo, Spain, waiting for an empty runway and a possible crash-landing. (The economy-class folks are all asleep, having been given tranquilizers for “Economy-Class Syndrome.”) The flight attendants try to entertain and distract the passengers, even by singing the title song in a hilarious dance routine that may be the film’s highlight. The story may be a thin framework in which to hang the stories of the pilots, flight attendants and passengers, but Almodóvar whips up an intoxicating cocktail. When Bruna (Lola Dueñas), a psychic who senses that the flight will be a special day for everyone, enters the cockpit, she connects to the beyond by touching the pilots’ crotches. Given that the pilot, Álex Acero (Antonio de la Torre), is cheating on his wife with Joserra, and even once had a drunken sexual encounter with his straight co-pilot, Benito (Hugo Silva), it is no surprise that the virginal Bruna finds powerful forces in the cocks in the cockpit.

“I’m So Excited,” which is fueled with heavy doses of tequila — not unlike the crew — is full of such naughty fun. The flight attendants decide to medicate the passengers with a Valencia cocktail, which they spike with a liberal dose of mescaline that was “ass-packed” by a hunky groom on his honeymoon (Miguel Ángel Silvestre). And once passengers like the uptight Norma Boss (Cecilia Roth) get drugged up, they mellow out and lose control.

Like the lyrics in the title song, which shout, “I’m about to lose control/and I think I like it,” Almodóvar has his characters trying to hide the fact that they are, as one man admits, “scared shitless.” The comedy that stems from this situation ranges from slapstick (the aforementioned musical number) to wacky coincidences. One passenger, Ricardo (Guillermo Toledo), is an actor who inadvertently reunites with his ex-girlfriend when she unexpectedly answers a call he makes from the plane to his mentally unbalanced girlfriend in Madrid. Their exchange — one of the few episodes set on the ground in Spain — is a diverting narrative curlicue that provides a nice payoff.

Almodóvar deliberately never makes any of their situations dire, as if to emphasize the fact that the film is a fiction. Even when the copilot is coming to terms with his sexual identity during an important cockpit procedure, the film is quite funny. And the filmmaker includes a comic rape scene (a running theme in all of his films) that is less offensive than usual because of how he sets up and executes the joke.

Much of the film’s humor stems from the fact that the performers are all game and having a great time. Cámara is highly enjoyable playing the chief flight attendant, a character who can only tell the truth — and does so at the most (in)appropriate times. Roth also makes her Norma a wonderfully bossy character who becomes much more tolerable for the crew (and viewers) when she’s had a dose of the mescaline cocktail. Even cameos by Antonio Banderas and Penélope Cruz, as members of the ground crew, are amusing.

It is great to see Almodóvar having such a good time with “I’m So Excited.” The film glides along on his zany energy, from the zippy opening credits to the farce that ensues on the flight. He uses his trademark red in everything from the curtains in first class to the details on the attendants’ uniforms, and includes some stylish imagery to keep this troubled flight joyful. By the time a pair of characters are rolling around in a sea of foam, audiences, like the passengers, will be too giddy to care if the ride was bumpy.