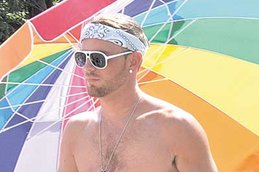 Coming up July 18-21 is the second annual Liberty Tennis Open Invitational. Open as in, you don’t have to be part of any group to play. Register through the Gay & Lesbian Tennis Association under the Philadelphia Open at www.GLTA.net. Fees cover the games, banquet and awards. The host hotel is the Loews and the draw party will July18, location to be announced. Play commences bright and early 8 a.m. July 19 and continues through July 21. The banquet will be held July 20.

Last year, the tournament saw about 70 players from across the continent join in the inaugural event and the group’s excellent efforts won Liberty Tennis national recognition as one of the best new tournaments of 2012 by GLTA.

All skill levels are welcome. All you need is enthusiasm. And a racquet. Games are played at the Legacy Youth Tennis and Education courts, 4842 Ridge Ave. Questions can be submitted to [email protected].

And taking some liberties with the balls and pins, nothing says Independence Day like the Liberty Belle—the Liberty Belle Invitational Open bowling tournament, that is. Celebrating its 25th Fourth of July weekend bowling extravaganza, this year’s tournament promises more fun, food and festivities than ever. The exact dates are July 5-7 this year so you can keep all your Independence Day fun going.

This tournament has the caveat of needing an IGBO-recognized established handicap to join in the fun, so if you have questions, see the website at libertybelle.org. T.E.A.M. What’s that spell?

Our Night Out is having a special sports night with Team Philadelphia and many of the area LGBT sports organizations July 9 at the Water Works. The timing is perfect: Opening ceremonies for Gay Games 9 in Cleveland-Akron is a mere 394 days from that date. It doesn’t matter if you’re a regular ONOer or an infrequent one, this river setting is everyone’s favorite spot for evening cocktails and camaraderie.

With all this in mind, I strongly urge everyone who intends to go to GG9, whether as a participant or as a spectator, to register NOW. Basic registration fees go up $30 on Sept. 1, and that’s $30 you won’t have to spend later if you wait. Pony up the basic registration fee now and the participant fee, lodging and transportation costs later. Keep on top of all of the Gay Games 9 updates via gg9.org.

And if you’re going to QFest for any number of films or parties, make sure you set aside July 19 for a QFest/Stimulus after party at North Shore Beach Club on the fringe of the Piazza in Northern Liberties. This official party has Team Philadelphia and GO!Athletes as two of the fundraising recipients.

See you along the river and the pool! Breaking news (and a token baseball tip)

The Cubbies are in town for the 11th annual Gay Community Night at Citizens Bank Park Aug. 7 Game time is 7:05 p.m., but you’ll want to be in your seat by around 6:45 to see the ceremonial first pitch and all the other hoopla.

This year, providing 500 or more tickets are sold, the LGBT community will be represented on the mound by the current Gay and Lesbian Lawyers of Philadelphia chairperson Angela Giampolo.

Get your tickets early, because they always sell out and you know you want to sit with 500 of your closest friends. Maybe we can even finally get a second gay night win to perk up that 1-9 gay night record. For tickets, visit phillygaydays.com.

What’s the tip? Stock up on your SEPTA tokens by the end of June because fares go up July 1.

• The Falcons men are looking for a few more players to play in the PSSC Penn Park 8 v 8 men’s turf field league starting July 22 for eight-10 consecutive weeks. More info at falcons-soccer.org. • CBLSL has fall ball registration open for the season starting Sept. 8. A fall ball kickoff party is planned for Aug. 23. Questions? Visit [email protected]. • Advocate magazine has listed 55 inspiring LGBT athletes for Pride month and you can vote on your favorite. Look for local boy Johnny Weir on the list as well as Pennsylvania hero Mark Bingham; advocate.com/sports.