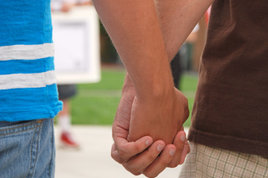 Marriage equality saw its greatest victory to date Wednesday with the defeat of Section 3 of the Defense of Marriage Act.

The federal ban on same-sex marriage was overturned in a highly anticipated 5-4 ruling by the U.S. Supreme Court. A separate ruling cleared the way for marriage equality in California.

Neither ruling established a constitutional right to same-sex marriage.

The DOMA opinion rather found that the section of the law that denies federal marriage benefits to same-sex couples who are legally married violates the constitutional equal-protection clause.

The opinion, authored by Justice Anthony Kennedy, held that the law is “invalid, for no legitimate purpose overcomes the purpose and effect to disparage and injure those whom the state, by its marriage laws, sought to protect in personhood and dignity.”

Kennedy went on to say that DOMA sought to displace this protection and treat same-sex couples as “less respected” than others. “Under DOMA, same-sex married couples have their lives burdened, by reason of government decree, in visible and public ways.”

With the defeat of DOMA’s Section 3, married same-sex couples will now have access to federal benefits such as joint tax filings, Family and Medical Leave Act benefits and Social Security survivor rights.

The ruling will also be felt in the immigration realm, as Americans will be eligible to sponsor a foreign-born same-sex spouse for citizenship.

However, some federal agencies, such as the IRS and Social Security Administration, grant marriage benefits based on a couple’s state of residence, while others grant rights based on the state of celebration, or where the marriage was conferred; it is yet unclear what steps the administration will take to ensure equal access to federal rights for married couples who do not live in a marriage-equality state.

The DOMA case was brought by 84-year-old Edie Windsor, a Philadelphia native, who was forced to pay more than $300,000 in inheritance tax after the death of her longtime partner, to whom she was legally married.

In a statement Wednesday, President Obama applauded the ruling.

“This was discrimination enshrined in law,” he said. “It treated loving, committed gay and lesbian couples as a separate and lesser class of people. The Supreme Court has righted that wrong, and our country is better off for it.”

Obama said he directed the Attorney General’s office and his Cabinet members to review all relevant federal statutes to ensure that the decision is reflected in federal law “swiftly and smoothly.”

AG Eric Holder said the Department of Justice will work “expeditiously” with other branches to implement the decision.

The momentous ruling was released minutes before another 5-4 ruling, written by Roberts, that the petitioners in the California Proposition 8 case lacked standing.

In that case, state officials declined to defend Prop. 8 against a legal challenge, prompting the organizers of the ballot initiative to take up the defense.

“We have never before upheld the standing of a private party to defend the constitutionality of a state statute when state officials have chosen not to,” Roberts wrote. “We decline to do so for the first time here.”

That ruling sent the case back to a lower court, with instructions for dismissal. Roberts was joined by Ginsburg, Scalia, Breyer and Kagan. Dissenting were Kennedy, Thomas, Alito and Sotomayor.

The rulings were hailed by LGBT advocates around the globe, including on the steps of the Supreme Court building, where a massive crowd of pro-LGBT supporters had gathered.

In Philadelphia, about 150 supporters gathered outside Independence Hall Wednesday night.

Director of LGBT affairs Gloria Casarez read a statement from Mayor Michael Nutter to the cheers of supporters.

Nutter called both decisions “momentous,” noting that, while Pennsylvania has its own DOMA-like ban on same-sex marriage, Philadelphia has emerged as a leader on LGBT issues.

“I am proud of Philadelphia’s contributions toward LGBT equality and am looking forward to the day when a Philadelphia mayor can legally perform a same-sex marriage,” Nutter said.

Casarez, who married her partner Tricia Dressel in New York in 2011, said the pair was on the phone together as the rulings came down.

“This is a landmark decision,” Casarez told PGN. “This will be one of those times we refer to in the future and we’ll recall today like we do the Annual Reminders, Stonewall, the Dewey lunch-counter protests. And this is going to be one of those things that we reflect upon and look back on with embarrassment that we even needed to do this. This isn’t about recognizing our relationships, it’s about recognizing our lives.”

While LGBT Philadelphians married in other jurisdictions will receive some federal benefits because of the ruling, Casarez said, Wednesday’s decision highlights the long road ahead for Pennsylvania.

“If you live in Pennsylvania, you can get married in New York or one of the other states that offer these rights, but you better think twice about putting that wedding picture on your desk at work if you live outside of Philadelphia. Since we don’t have a statewide law to protect against discrimination based on sexual orientation or gender identity, it’s still not entirely safe for us to be LGBT people in Pennsylvania. I want to be optimistic that this ruling is going to right some of the wrongs in Pennsylvania, but ultimately it’s going to take a lot of work. So I think we’re going to see court cases and we’re going to need our legislators to really push these issues. These rulings really point to the fact that there are big decisions to be made in Pennsylvania.”

“This ruling really sets us apart from the states around us even more,” Martin said. “We need to challenge the state’s DOMA. Now’s the time.”