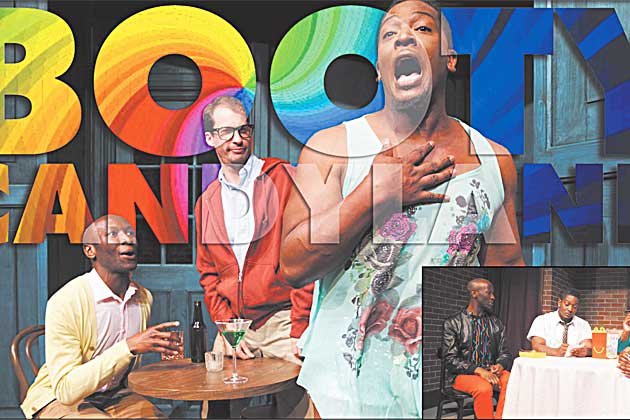 The Wilma Theater closes its current season in hilarious fashion with the Philadelphia premier of “Bootycandy,” through June 16.

The play consists of a series of Vaudevillian vignettes written and directed by out playwright and scribe Robert O’Hara. The vignettes deal with issues about love, soul and race filtered through the experience of a gay character, as well as through O’Hara’s witty references to icons like Michael Jackson, Jackie Collins and RuPaul.

O’Hara has been honored in recent years with an Obie Award, a Helen Hayes Award and the NAACP Best Director Award for his plays, which usually involve and combine historical narratives with social commentary, fantasy and bits of science fiction.

“I like history and what was left out of history,” O’Hara said about his works. “Being black and gay, I’m usually left out. I like alternative versions of history and ‘what-ifs’ and how they change how we think about who we are now. I usually play upon what we think we know about ourselves and back track. I feel that the theater is there to play with things and do playful things, and it’s a way to see real life.”

On its surface, “Bootycandy” seems like a departure from O’Hara’s previous award-winning works like “Antebellum” and “Insurrection: Holding History,” both of which dealt with alternate histories.

“Bootycandy” is a more modern-day story that portrays what it’s like growing up gay and African-American and explores how people talk about human desire and racial stereotypes at home, in church and on the corner.

“It has a variety-show feel to it,” O’Hara said about “Bootycandy.” “It’s a different audacity to it. Tone-wise, I’m always mixing the profane and the enlightened with each other. I don’t know if it’s completely different from my previous works because my ideas tend to be explicit and extreme at times.”

O’Hara said “Bootycandy” started out as a production of loosely related short stories that he had written over the course of his career.

“It’s a nonlinear story,” he said. “It started out as 10 short pieces that I had written over 10 years. I had gotten them together several years ago. I did a night of short pieces and I called it ‘That Holy Bootycandy.’ Then I was asked if I wanted to take a couple of those pieces and make them more streamlined with some of the characters. So I threw out 70 percent of the plays and I created a whole storyline for ‘Bootycandy.’ I took a few characters in one play from the original ‘Bootycandy.’ So it’s a wholly new beast now. You follow a character through his nonlinear interactions in his life, and you see sort of how ugly those real-life events are.”

The issues bandied about in “Bootycandy” seem timely, considering the ongoing evolution of issues like gays in professional sports, the African-American community and the church.

But to O’Hara, the times are lagging considerably behind his visions.

“I wrote ‘Bootycandy’ several years ago,” he said. “I think the times are just catching up. For other people, the time may be right but this time has been here for some time in my books. Now people have a context when they see the show. It changes and makes some of the show not as outlandish as it would have been before.”

He added that African-American churches aren’t alone in their hang-ups about gays.

“I don’t think it’s necessarily an African-American issue,” he said. “I don’t know any church that welcomes everybody and anybody, certainly not homosexuals — the Jewish church, the Catholic Church. I don’t know of any church that welcomes gays with open arms. It’s a universal issue. I definitely deal with a lot of issues, and there just happens to be a lot of black people on the stage. There a lot of people who don’t look like me and yet the issues that they are dealing with I can relate to.”

“Bootycandy” has a lot of Vaudevillian traditions in its presentation, which sounds like a throwback to the ghosts of theaters past.

But, O’Hara said pop culture is more accustomed to Vaudeville than many think.

“There are a lot of different places you can see that,” he said. “You can see it on ‘Saturday Night Live.’ I saw it on ‘In Living Color.’ Now you have ‘America’s Got Talent’ and ‘The Voice.’ This is all a variety of acts coming out and showing their wares. I think the theater is a unique place and you can add stories and a different type of context to it. But I think the traditions of Vaudeville are pretty much alive.”

O’Hara’s stories have not only caught the attention of theater audiences, but also players in Hollywood as well, as he has written films for high-profile directors like Martin Scorsese and Spike Lee.

It sounds cool but the reality of it, O’Hara said, is sometimes less than glamorous.

“I worked with them and neither one of them have been actually made into films. The film industry is a very different beast. I can write a play and three months later it is up and being done and being seen by audiences. Film takes years and directors have several projects. When I wrote for Spike Lee and Scorsese, it was one of several projects that they were considering and working on. My projects have never been actually made into film. But I’m not surprised that they are interested in my work. They look for talent and unique voices because they both have it. It’s surprising that I was sitting in the rooms with those directors, but not that they were looking for a unique voice.”

With all the influences and messages in O’Hara’s works, he says he isn’t concerned about his stories being diluted by the Hollywood machine—on the off chance one of his works makes it to the screen.

“Film is about people paying you a lot of money to get lost,” he said. “It’s a director’s medium. When you write something, you do not own it. You’re probably not there when they are filming it and you are definitely not there when they are editing it. So the things that you write for film go through so many different processes that if you think that is what is going to end up on screen, you are either crazy or naïve and crazy. I understand the mechanics of filmmaking: You write one film, they film another film, they edit another film and then they market another film. There are all these filters that your film has to go through. So I don’t have that problem with the ego because there’s a lot of money involved and there should be egos.”

For now, O’Hara is focusing on writing new plays.

“There are some icons that I would like to write plays about,” he said. “I’m writing a play about Dick Gregory. I’m working on something that has a Whitney Houston biography imbedded in it. It’s not a direct biography of her. I like the larger-than-life individuals. ‘Bootycandy’ has a lot to do with my relationship to Michael Jackson as an icon and his music and what they meant to me in my life. There are various ways I attach myself to iconic individuals. I have several ideas at one time so I just let them stew around. I don’t really know what I want to write next because I am writing it. I’m writing whatever I want to write. I’m lucky enough to be able to go ahead and do it.”