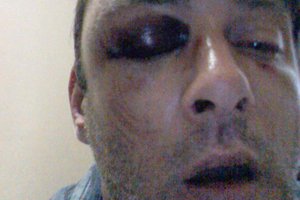 A gay former Philadelphia party promoter was attacked Monday night in New York City, and the suspect has been charged with a hate crime.

Dan Contarino was attacked and beaten unconscious Monday in the East Village neighborhood of Manhattan by a man he had shared drinks with, police said. The suspect allegedly used antigay slurs during the attack.

He said the two had gone to a bar and were walking home around 8:30 p.m. near Avenue D and East Fourth Street when Gornell, who he said was very intoxicated, began mumbling and then turned violent.

“Honestly, the only way I can explain it is that he just snapped. Whether it was the alcohol or what, his personality just flipped,” Contarino said. “He started mumbling and saying things like, ‘Why are you gay?’ and using slurs and that’s the last I remember. Thankfully, I have no memory of being beaten and kicked.”

Contarino said Gornell and he had talked about his being gay earlier in the night, but that it was not a topic Gornell dwelled on.

“He knew I was gay and told me his cousin’s gay,” he said. “So it wasn’t like it was some announcement or anything. And it’s not like I tried to hit on him; he’s not my type. He just snapped.”

Contarino said a crowd of up to 20 witnesses gathered and tried to pull Gornell off him, and that Gornell then fled. Contarino was transported to Bellevue Hospital and treated for two cracked ribs and facial injuries. He said doctors told him the injuries to his eyes will take up to a month to heal.

The attack comes in the wake of a spate of antigay attacks in New York City and just hours after a rally calling for an end to antigay violence. Two other gay men were recently attacked in SoHo, while another man was shot and killed last weekend in the West Village, allegedly for being gay. An arrest was made in that case, and the suspect was charged with second-degree murder as a hate crime.

Sgt. Lee Jones of the New York City Public Information Office said the cases do not appear to be related.

“At this time, we are investigating each incident separately,” he told PGN.

Contarino concurred that his attack was not linked to the others, but speculated that they all could be a byproduct of the rapid acceptance of the LGBT community in recent years.

“With everything happening so fast in society, with gay marriage and everything, I think some people may have a lot of repressed anger,” Contarino said. “Some people have problems and, maybe it comes out when they’re drinking, but things are moving so quickly for the community that maybe it’s causing people to snap. These were all isolated incidents, but overall these may be coming from people suppressing things.”

Contarino said he’s grateful to the group of witnesses who intervened.

“I’m very lucky and very humbled because this could have been much worse,” he said. “This happened early in the evening so there were 20 people on the street. If it happened three hours later, I could be dead.”