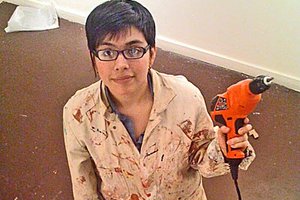 Double Portrait Philadelphia Museum of Art presents an exhibition of works from designer Paula Scher and illustrator Seymour Chwast, through April 14, 26th Street and the Parkway; 215-763-8100.

For Colored Girls Who Have Considered Suicide When The Rainbow Is Enuf First World Theatre Ensemble presents the acclaimed drama, through April 7 at Community Education Center, 3500 Lancaster Ave.; 267-329-9746.

Journeys to New Worlds Philadelphia Museum of Art presents an exhibition of Spanish and Portuguese colonial art from the Roberta and Richard Huber Collection, through May 19, 26th Street and the Parkway; 215-763-8100.

The Mind’s Eye: 50 Years of Photography by Jerry Uelsmann The James A. Michener Art Museum hosts an exhibition of iconic photographs from the famed photographer, through April 28, 138 S. Pine St., Doylestown; 215-340-9800.

Cy Twombly: Sculptures Philadelphia Museum of Art presents an exhibition of works from the Swiss sculptor, through March, 26th Street and the Parkway; 215-763-8100.

Forever Plaid Media Theater presents the story of The Plaids, a classic 1950s all-male singing group that returns from the Great Beyond to perform the show they never got to when they were alive, through March 31, 104 E. State St., Media; 610-891-0100.