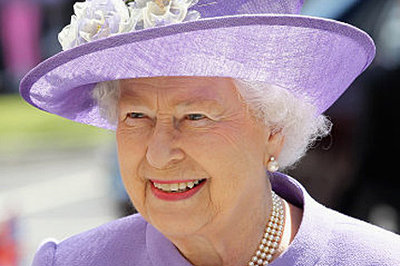 Queen Elizabeth II has no direct impact on my life. I’m not one of her “subjects,” nor do I follow the obsessive tabloid coverage of what the royal family does in their day-to-day lives. (Granted, I can’t help but hear “news” that someone named Kate is having a baby and someone else let his royal dinger get photographed in a hotel room with a bunch of chicks. Important stuff.) I’m an American, damn it, and we got rid of all that royalty stuff a long time ago because it was weird to be ruled by kings and queens and we decided we’d rather be ruled by money, the way God intended.

And then there was that whole kerfuffle a few years ago about Michelle Obama “breaking protocol” and daring to touch the queen as if they were equal humans or something. Give me a break. The queen should feel privileged to even be in the same room with the FLOTUS. Also, for the record, photos clearly show Queen Elizabeth II with her hand on Michelle Obama’s ass. Google it.

But when I heard that Queen Elizabeth II was about to sign some important thing that included LGBT folks, I thought, “Hey, that’s good news. Looks like she’s earned the title of Queen at long last.”

That document was a new Commonwealth Charter, which was dubbed a “21st Century Commonwealth Magna Carta” by the Daily Mail. The charter, according to National Public Radio, declares the core values for the 54 member states, most of which were once under British rule. So, in addition to the United Kingdom, it includes places like Australia, Rwanda, South Africa, the Bahamas and Canada. And, as it turns out, some of these places do not like gays very much at all.

So what does this amazing new Charter have to say under the heading “Human Rights?” It says this: “We are implacably opposed to all forms of discrimination, whether rooted in gender, race, colour, creed, political belief or other grounds.”

Did you notice the big, brave stand for gay equality in there? What? You missed it? Well, read it again. Still don’t see it? Let me help you out. You see, Queen Elizabeth II is famous for her notoriously bad spelling. And in the Charter she spelled “sexual orientation” as “o-t-h-e-r g-r-o-u-n-d-s.” It’s a common mistake.

Now, I know that Queen Elizabeth II did not actually write this Charter, but she did sign it publicly with a bunch of fanfare, and she’s now being hailed as this great progressive leader even though gay people aren’t even mentioned in the Charter! Gays are referred to as “other,” this category that dare not speak its name.

And why is antidiscrimination protection not spelled out in this document? Because a lot of the 54 members of the Commonwealth Club stone-cold hate gay people.

According to the Daily Mail, “The ‘other grounds’ is intended to refer to sexuality — but specific reference to ‘gays and lesbians’ was omitted in deference to Commonwealth countries with draconian antigay laws.”

In other words, the queen didn’t want to step on anyone’s toes.

The Daily Mail also reports that the queen is “aware of the implications of the Charter’s implicit support of gay rights and commitment to gender equality.”

And now we’re all supposed to hail her as a supporter of civil rights because for the first time during her 61-year stint as queen, she used a special secret code to imply that gays are maybe human too? Give me a break.