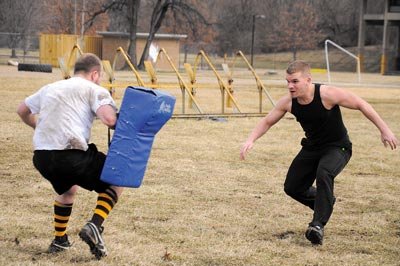 The Attic Youth Center has long been one of the darlings of the LGBT sports community when it comes to fundraisers and donations.

Last month, members of the Fins Aquatic Club took a tour of The Attic to get a better idea of the building space, programs and educational opportunities offered throughout the year to those ages 14-23. The Fins followed that by donating half of their Postal Swim fundraising dollars to The Attic.

Now, the community has another great way to support The Attic — T-shirts and other printables. With a long list of season openings this spring that includes softball, rugby and flag football, this is an opportunity to get your shirts made and simultaneously help The Attic.

Beth Pulcinella is The Attic resource in charge of the printing press, as it were. They keep the prices competitive, she adds. Pulcinella has been working with quality designers and ordering shirts locally through Bodek Rhodes and Alpha Shirts.

“We have mostly printed on T-shirts,” she said, “but they have every kind of product in stock — tote bags, long-sleeve, hoodies, polo, organic, and we could probably do rally towels easily as well.”

The only limitation for now is the number of colors that can be used.

“We have a four-color limit, which makes rainbows a little difficult,” Pulcinella said. The website is being updated and there should be better visuals by March. Gay Games 9 If it’s not a question of if, but when. you plan to register for Gay Games 9 in Cleveland in 2014, sooner is definitely better than later.

Why? First of all, you save money. Registration to participate is currently $165, and that goes up to $195 Sept. 1. You also don’t have to pay for your competition entry fee at the same time. Take care of that later.

Sure, you could wait until this summer, when you’re spending money on vacations and long weekends—but why not throw some of that income-tax return at it? Then it’s done and off the budget list.

Another good reason is to help the organizers. The more early registrations they have, the easier their job is to find sponsorships. You try to raise $2 million in two years.

And did you know that if you cannot or decide not to attend the Games next year, your registration is transferable? Yup. It’s good as gold and a lot less heavy.

Keep your eye on this column for regular GG9 information and adventures, and in the meantime, get out and play!

Short stops • Gryphons’ monthly first Saturday party in March is at UBar 9 p.m. March 2, and the team is having a special Shamrocks and Jocks party March 16 at Westbury. You don’t have to be a player to come out and play; philadelphiagryphons.org. • March 16 is skills day for the City of Brotherly Love Softball League. Skills day is followed by the league’s spring pub crawl, which commences at 4 p.m. The Bar route will be included in the next Get Out and Play column; cblsl.org. • Greater Philadelphia Flag Football League is prepping for another spring season. Registration opens 5 p.m. Feb. 25 and closes March 18. The league is limited to 144 players, so register early to guarantee a spot; phillyflagfootball.com.