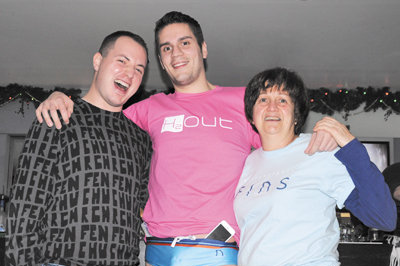 It’s called the Postal Swim. But many of the people who participate in this competition/fundraiser don’t know why. I didn’t either, which is why I asked Melanie Kasper Rodbart, vice president of the Fins Aquatics Club, what the name meant. First, some event background: The big picture is that participants swim as many laps as they can in a set amount of time. For the hard-core athletes, this means swimming for an hour. Each swimmer has a timer and a lap-counter.

Some do it for fun; many do it to help raise money. This year, the Fins are splitting the raised money between themselves and The Attic Youth Center. Some do it to break records for the number of laps/yards swum in an hour. The categories are broken down by gender and age to make the competition fierce. For instance, for men and women ages 35-39, the record number of yards swum in an hour is 5,509 and 5,645, respectively. That’s a lot of lapping.

But the Fins aren’t the only ones to play in the water, as other U.S. Master Swimming groups participate across the entire country the same day and time. When the event is over, each group will send in their totals for Postal Swim organizers to see how they fared against each other.

When Postal Swim began, teams would mail in a hard copy of their results. Hence, the moniker, “Postal” Swim. And it stuck. (Maybe because Electronic Swim doesn’t have that same ring to it.)

Many thanks to Melanie for providing the history and statistics. For pledging, contact her directly at [email protected]. To volunteer, visit philadelphiafins.org. GG9

— Swimming A number of Fins will represent Philadelphia at the Gay Games in Cleveland next year. Support them in their journey now by helping raise money through the Postal Swim. If you think you’d like to go to the games as a Fins member and Team Philadelphia representative, it’s not too late to get involved.

Swimming has one of the largest numbers of participants and is one of the most competitive sports in the Gay Games. It has also been a favorite spectator event for any number of reasons. Whether you go to the games to compete or support, know that there are so many swimmers and races, you could go to a swimming competition every day at the Gay Games. In either case, get out and play! You can also get general Gay Games info at gaygames.org or specific GG9 information at gg9cle.com.

Short stops • The meet-up time for the Frontrunners’ Saturday morning run starting at Llyod Hall has been incorrectly listed here and on the PGN bulletin board as 10:15 a.m. The correct meeting time is from 9:30-9:45 a.m. Apologies. • The Spartan Wrestling Club practices are now 6:30-9 p.m. every Monday in the basement of First Unitarian Church, 2125 Chestnut St.; phillyspartans.com.

Countdown to Gay Games 9: 574 days until the opening ceremony.