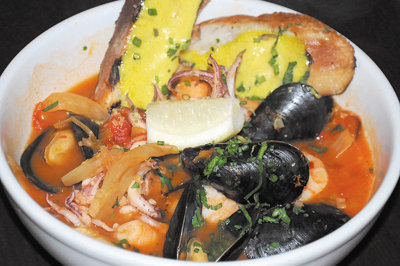 If you haven’t been to Oyster House, 1516 Sansom St. , in a while, you’ll be pleased to find out that the owners have snazzed up the place a bit. Its brighter and more-modern décor is great for knocking back a few of their wonderful mixed drinks and sublime selection of oysters. The shrimp cocktail ($13) is the kind you hope is served in the afterlife. We adore their aggressively spicy cocktail sauce. Dessert was special too, courtesy of their banana layer cake and seasonal fruit crumbles.

Here’s the rub. In between all that greatness, we had some issues. The biggest one was this: How does a seafood place not even come close to doing an amazing New England clam chowder?

We’ve all had New England clam chowder. We know the approximate look and feel. When done right— hell, when you open the right can—it is a warm, liquid, physical and mental blanket that greets you after a cold day of backbreaking maritime work, sailing the wild seas to haul home bounty that will enable you to feed your family. Or maybe you’re just watching a marathon of “Deadliest Catch.” The point is, there is a pretty universal blueprint for New England clam chowder, and what we got at Oyster House was stupefying in its inability to hit any of the sweet spots we have come to expect from this soup. The white, thick, velvety, piping-hot potion we envision in our dreams was unimpressed by the sickly grey, thin, somewhat tepid and under-seasoned concoction that they wanted us to call New England clam chowder.

One New England staple that Oyster House did nail the taste and feel of was the lobster roll ($26). No problems there. The grilled octopus ($13) was fine, except that it should be called grilled potatoes because the garnish outnumbered the protein on the plate. The Fried oysters ($10; $13 with chicken salad) were perfect and another excuse for us to indulge in their awesome cocktail sauce. We heard that most people order the oysters with the chicken salad, but we found it to be an unnecessary distraction.

The Oh Burger ($14), the sole refuge for red-meat enthusiasts, has a strong flavor thanks to being topped with blue cheese and fried oysters. Adventurous diners will love it, but it might be a slight turn-off to anyone looking for a simple burger.

The best-cooked dish we had by far was the Fisherman’s Stew ($21), a steaming treasure trove of fish and seafood bathing in a spicy broth and saffron rouille. It was pure perfection that made us let go of any grudge we had about the clam chowder.

Despite a couple of bumps in the road, we still love Oyster House to pieces. Next payday, we’ll happily go back and gorge on raw and chilled seafood and drinks.