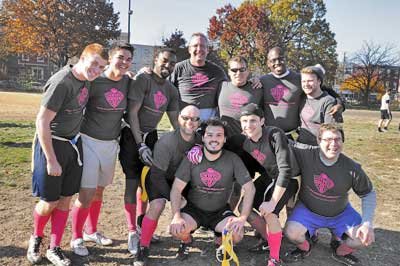 As is the case in many a game, the final score tells only a small part of the story — who won. And, as I predicted two weeks ago, the final match-up of the Greater Philadelphia Flag Football League 2012 fall season was spectacular. Consider that the season-undefeated Steel Magnolias went into the second half of the game having turned the ball over twice, including once in the end zone; quarterback Andre Dionne had been sacked, their best receiver was injured and they were down 13-0. The Navy Seals were sealing the fate of these delicate flowers, mostly through the Magnolias’ own sacrifice. Consider that two outstanding drives by Dionne in the second half took the Steel down the field twice, once for a score by co-captain Wes Coulter with a Greenberg conversion and wobbly Enrique Trevino coming in to tough it out for the second touchdown, making the extra point, unlike the Seals. Score: 14-13. But that wasn’t dramatic enough for these two never-say-die teams. The Navy Seals marched solidly down the field and into scoring range again. The two-minute warning sounds and they were still battling towards the end zone for a game-winning last-minute touchdown. Indeed, with three seconds left on the clock, Terrance Doran threw into the corner to Nick Kirkstadt, who was able to catch the ball—but stepped out of bounds as he did. Final score: Steel Magnolias 14, Navy Seals 13. Great game, guys! I am already looking forward to spring.

Political track and field Congratulations to Anna Aagenes of Go! Athletes and well wishes to her in her new capacity as district-office director for state Rep.-elect Brian Sims. She will provide some of the district constituent services and direct community outreach and engagement with the people and organizations in Sims’ district. Prior to this appointment, Aagenes worked at Children’s Hospital doing clinical research with HIV-positive youth, and recently participated in the first Nike LGBT Sports Summit. Aagenes can be found in her free time running marathons and getting ready for the 2013 Gay Games in Cleveland.

Play with me! If being the last guys of the entire LGBT sports spectrum still out on the field in November isn’t enough, the fun fundraising guys of GPFFL are also volunteering time and talents at Delaware Valley Legacy Fund’s annual TOY, Dec. 1 at Reading Terminal Market. This event is one of Philadelphia’s finest examples of philanthropy and good will combined. Stop by one of the bars (as if you need to be told to!) and thank the people helping make this monster fundraiser and Children’s Hospital toy drive a huge success again this year. Food, drink, toys, football players — it’s the perfect way to get out and play!

Short stops • Tennis anyone? Liberty City Tennis Association is actively recruiting players for the winter season at Athena Gibson Community Education and Tennis Center, at the corner of 10th Street and Girard Avenue. For more information, visit www.philadelphialibertytennis.com. • Sports and recreation information is included in the PGN Community Bulletin Board every fourth Friday of the month and also can be accessed at epgn.com.