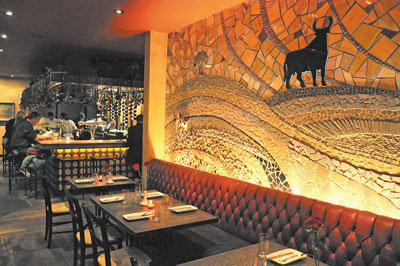 With Black Friday weekend upon us, we know you are probably consumed with surviving the crushing influx of frenzied shoppers and family drama. So rather than spin a yarn about Bar Ferdinand, 1030 N. Second St., which is excellent, we’re going to rattle off the top-10 reasons you should make this Spanish tapas restaurant a stop at some point during your holiday rituals.

1. Bar Ferdinand occupies a beautifully romantic candlelit space in a happening section of Northern Liberties. The restaurant is named after a beloved children’s book character, a bull that prefers to smell the roses instead of fight. Quaint, isn’t it?

2. The sherry-tasting flight ($14) was every bit as essential to the dining experience as the food.

3. The menu is currently in transition, so it’s a great time to see where the restaurant has been and where it’s going. Both have their strong points.

4. The croquettes are crisp balls of pure joy. The only problem with the jamón croquetas (ham croquettes with charred scallions, $6) was that they hit the table the same time as the crab and saffron rice croquettes with lobster roe aioli ($10). The former was in essence the sum of it parts, while the latter was extraordinarily amazing in its combination of savory flavors.

5. Bar Ferdinand knows how to serve up some shrimp. The salpicon di gambas ($7) was a delectable dish of chilled shrimp and chopped paquillo peppers, red onion and fennel that made us wish tapas meant large plates instead of small plates. The shrimp al ajillo ($12) was the perfect pile of sizzling steamed shrimp bathed in a wonderful garlic sauce that was bold without being obnoxious.

7. The almond-crusted eggplant cigar ($6) with spiced honey made us a fan of eggplant again, as the crusting gave the fried veggie a wonderful crunch that counteracted any of the sometimes-bitter overtones and sogginess associated with eggplant.

8. Visually interesting as well as tasty, the corn flan with sea urchin ($8) was artfully served in an egg shell and delivered a smooth, buttery flavor.

9. The tuna crudo ($12) threw us a pleasant curve. Usually, dishes like this rely on a spicy and acidic flavor profile, but this one veered towards greener territory with an arugula puree, celery and apple cider sauce that was refreshingly unique.

10. The house-cured pork belly in duck fat ($12) might sound like a coronary on a plate but it’s not quite as decadent-just damned tasty.