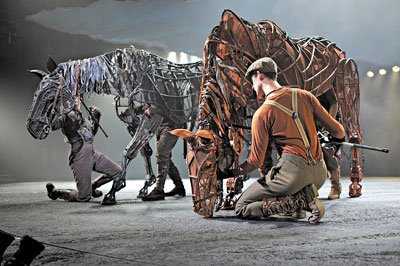 The Kimmel Center is galloping into the holiday season with the Philadelphia premiere of the award-winning “War Horse,” through Dec. 2.

Based on Michael Morpurgo’s epic novel of the same name, “War Horse” is the story of young Albert’s beloved horse, Joey, who is enlisted to fight for the English in World War I. Joey ends up serving both sides of the war before he lands in no man’s land, spurring Albert to embark on a harrowing journey to find his horse and bring him home.

The novel was the inspiration for Steven Spielberg’s feature film, which earned six Oscar nominations including Best Picture.

The stage incarnation is a stirring drama, filled with moving music and songs. It won five Tony Awards last year, including a special honor given to Handspring Puppet Company, which brings breathing, galloping, charging horses to life on the stage.

“The use of puppetry in the show was really the only way the story could be told on stage,” said Jon Riddleberger, an out cast member and puppeteer. “If the creative team had tried anything more realistic, it wouldn’t be as successful a show. I think the puppets tell the story in a surprisingly thorough way for a lot of audience members who have never experienced puppetry of this kind.”

He said it takes a lot of work for three puppeteers to convincingly portray a horse live on stage.

“Well, I’m not a horse so that makes it hard,” he joked. “The biggest challenge and one of the biggest blessings of doing this show as a horse is I have two teammates who are performing the same role with me. It takes three people to operate the horse. I’m always a head puppeteer. It’s a challenge because the three of us are having to operate as one creature with one mind. It’s a huge blessing because it means it never gets boring. I’m always connected to someone else who is going to make a different choice on stage than I would and who is going to see something that I don’t and respond to it. It’s all of our jobs to just kind of embrace that spontaneity and that collaboration and make a story happen. But it works.”

Riddleberger added that another hurdle was learning the different nuances of playing the other horse, Topthorn, in the production.

“I play both horses on different nights,” he said. “There was a point when we were rehearsing the show where I stopped trying to learn how to be a horse, because that was step one: How do we portray a horse? Step two was how do we distinguish different characters within the horses? That’s been a really exciting thing to do. It’s a huge acting challenge because you’re essentially reworking your instincts about how you see the work and how you respond to what’s around you. We have two different horses that respond to the same exact stimuli because they are in a lot of the same situations together, but they respond differently.”

While a lot of people are familiar with the story of “War Horse” through the popularity of the film and book, Riddleberger said the stage production is a unique experience.

“The three different forms of the story are all told very differently,” he said. “So if you’ve read the book or you’ve seen the movie, you haven’t seen the play and vice versa. We get a mixture of people at the show. Probably more people know of the movie than the book.”