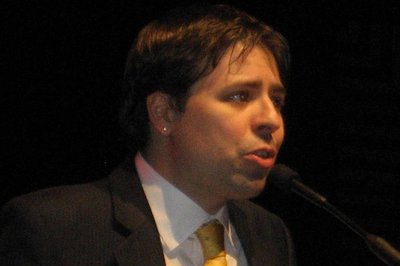 A former Philadelphia resident and past William Way LGBT Community Center employee was recently announced as the next president of a national LGBT grantmaking agency. Ben Francisco Maulbeck, 35, will assume leadership of Funders for LGBTQ Issues on Dec. 3. Since the New York City-based organization’s founding 30 years ago, Maulbeck will serve as its third president. Maulbeck, who worked at William Way as its director of programs and volunteers from 2000-02, credits the center for giving him the experience he needed to branch out in the nonprofit sector. “I believe community centers do important work in the front lines of the LGBT world,” he said. “At the time, there was only four of us on staff and it really was all hands on deck for everything. I really learned to be the jack of all trades.” Maulbeck previously served as board president of the Gay and Lesbian Latino AIDS Education Initiative from 1998-2002 and later as the board co-chair of the Community HIV/AIDS Mobilization Project from 2006-10. He earned his bachelor’s degree at Swarthmore College and his master’s in public policy from Harvard University’s Kennedy School of Government. Maulbeck is also a published author and has had stories in a number of LGBT anthologies. The New Jersey native spent a lot of time in the city while he was in college. He said he found the diversity of the LGBT community in Philadelphia refreshing. “I met so many fascinating people and they were all very different from each other,” he said. Maulbeck currently lives in Brooklyn, but said he remembers well how local LGBT community members acted in concert with one another. “I miss that sense of community and intimacy and people just coming together and making it work,” he said. “Everybody just knows what is going on in the community and they know each other.” He left Philly several years ago for a job opportunity at Hispanics in Philanthropy. Maulbeck started off with HIP as the Northeast program manager, where he oversaw the Philadelphia HIP site as well as its New York and Washington, D.C., agencies. He later served as director of U.S. programs and, most recently, as the agency’s vice president. “The thing I loved about HIP was the opportunity to bring together people who were helping the grassroots organizations,” he said. “We worked with amazing grassroots Latino organizations and funders to help them.” Maulbeck was also impressed with HIP’s strong intersectional focus. “HIP made sure that funding is flowing through LGBT Latino communities,” he said. As the newly appointed president of Funders for LGBTQ Issues, Maulbeck is eager to maximize the agency’s impact. “I want to continue the organization’s work as thought leaders for bringing together funders who are supporting LGBT issues,” he said. “How can we have the most impact with our limited dollars?” According to Maulbeck, Funders recently released a report that found funders across the nation only provided $90 million to LGBT causes in 2010 — out of about $45 billion that is dispersed each year. He said he’s anxious to see that number increase. Maulbeck also hopes to bring in non-LGBT funders and funders of all sizes. “I plan on seeing how the funders connect with LGBT communities. If there is a funder for education, I want to see what they will do for the LGBT community, for example what they will do against bullying to make sure schools are a good place to be,” he said. Maulbeck said the LGBT and progressive victories in this month’s election give him hope. “We are seeing a shift of allies who support us and want to participate in the conversation.” Maulbeck said Funders has a “strong culture of collaborative leadership” that attracted him. He also noted that the agency, like HIP, takes an intersectional approach. “They have a great track record of embracing racial and gender justice and economic equality,” he said. “That really excited me.” Funders board chair Andrew Lane said the organization’s board and staff are “thrilled” to welcome Maulbeck. “We believe Ben will catalyze the transformation of LGBT issues within philanthropy, and we’re honored and excited to partner with him on our journey forward,” Lane said.