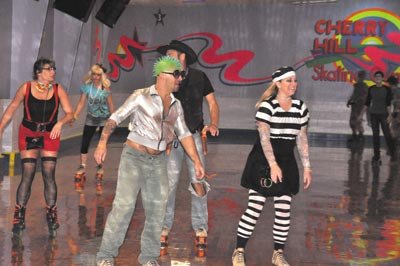 One of my goals with this column is to garner some cross-sport support. Whether it is getting softball players to hit up a rugby match or a soccer practice or getting football players to check out the wrestlers or swimmers, we should support our fellow athletes either financially or just by showing up once in a while to cheer a game. In the coming weeks, this column will cover more of the indoor sports, for obvious reasons. That is not to say there are hard lines drawn between indoor and outdoor recreation — swimmers, wrestlers, bowlers and other organizations are indoor year-round. There will be winter fundraisers for outdoor sports to report, as always. But for now, while there is no field of dreams being used for outdoor sports, I encourage everyone who is an athlete, a friend or partner of an athlete, or even just an interested party in some activity, to get out and play with other members of our community. Athletic honors At the 30th-anniversary party for the Gay Games in Los Angeles last month, several well-known people and organizations, and one lesser-known person, were recognized for their contributions to the LGBT sports scene. Medals of honor were awarded to Patricia Nell Warren, author of “The Frontrunner,” filmmaker David Secter and The Trevor Project, which received the Youth Legacy Youth Award.

In a show of solidarity for unbiased and open media reporting, the Legacy Award for Social Justice was awarded posthumously to Erick Martinez Ávila. Ávila was an out journalist and spokesperson for Kukulcán, a Honduran LGBT-rights organization. In the past three years, nearly 20 journalists have been murdered in that country. Let’s get rolling Delaware Pride, Inc., is getting the ball rolling with its Delaware Pride Bowling League at Bowlerama, 3031 New Castle Ave., New Castle, Del., starting Nov. 5. Anyone who wants to bowl is welcome; you don’t need an entire team to participate. This is an LGBT and ally three-person-team bowling league that meets every Monday through the end of April. Participants pay a $15 weekly bowling fee, some of which goes into prize money for the end-of-year banquet. For more information, email [email protected]. In the long run … It’s too late to sign up for the Philadelphia Marathon and run with our Philadelphia Frontrunners Nov. 18, but volunteers are still needed. You can help in race areas handing out water to runners or be part of the Waste Watchers team overseeing recycling and more. All volunteers will receive an official 2012 Philadelphia Marathon volunteer sweatshirt. Register online at www.philadelphiamarathon.com or call 215-638-2122. Short stops • GPFFL is participating in MANNA’s Pie in the Sky fundraiser. To buy a pie, go to www.phillyflagfootball.com. • Philadelphia Rollergirls will host a workshop 11 a.m.-2 p.m. Nov. 11 at Millennium Skate World, 1900 Carman St., Camden, N.J.; www.phillyrollerderby.com. • Sports and recreation contact and website information is included in the PGN Community Bulletin Board every fourth Friday of the month on the inside back cover and can also be accessed at epgn.com. Countdown to Gay Games IX: 658 days. If your team, league, group or organization has a game, practice, fundraiser or event for Get Out and Play, email [email protected].