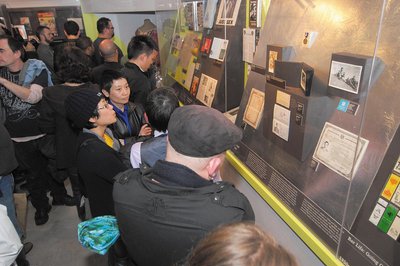 It’s a commonly accepted fact that the world has always perceived San Francisco as a gay mecca. The city has been at the forefront of LGBT political and cultural movements and is home to a vast array of support networks, nonprofit organizations and government institutions that are symbolic of the intellectual and financial capital that exist. That capital is leveraged every day to advance the rights of LGBT people everywhere. San Francisco is a beacon and when something happens in the city, the global LGBT community hears about it.

Take, for example, the opening of the city’s GLBT History Museum last year. The GLBT Historical Society did a customary public-relations campaign and received coverage of the opening in 38 languages across 75 countries.

“From Angola to Vietnam, everyone had to do a story,” said GLBT Historical Society founding member and curator Gerard Koskovich. “San Francisco remains astoundingly marked as the world mothership for homosexuality.”

For any city with a far-reaching impact on any front, a particularly unique and dynamic history is always part of the story. San Francisco is no different. As far back as the Gold Rush era (1848-1855), homosexuality possibly existed as the city became a boomtown that was heavily populated by men who wanted to try their luck out West.

“You had a self-selected population where there was bound to be some men who didn’t fit in back home,” Koskovich said, “because they were queer and this all-male setting might be interesting to go looking for opportunities.”

The transition to San Francisco as a major port city through the end of the 19th century solidified it as a place that was flexible and tolerant, which allowed for same-sex desire to be displayed in certain spaces and in nuanced ways. Cruising spots popped up in the lower Market Street area, which was connected to a very vibrant port and produce market that is today the Embarcadero.

Don Romes-burg, an associate professor of women and gender studies at Sonoma State University, described the waterfront as a place where the potential for same-sex intimacy was presented.

“Men were picking up men for sex,” Romesburg said. “You have what we might call faeries or either cross-dressing men or transgender women who were selling sex and having unpaid sex with men. You also have the red-light district, places where there were women together and the potential connection between them.”

In the 1920s, venues emerged that were amenable to gay and lesbian people. Although the locales did not specifically cater to LGBT people, they also did not turn them away. Because alcohol was illegal until 1933 with the end of Prohibition, bars were no more illegal if they had queer people in them. The risks of running or entering a bar outweighed publicly presenting a queer identity.

After 1933, small bars and clubs sprung up in the North Beach area, especially around the Montgomery Building (torn down in 1959), which was called the “Monkey Block.” Progressive artists, bohemians and queers lived in the area and became clientele to these venues, some of which were advertised as gay-specific. As alcohol became condoned but homosexuality remained illegal, the ways homosexuality was expressed in those spaces began to change.

“They were a home space for gays and lesbians but a destination for tourists who wanted to mingle with the queers and see performances,” she said. “It was an early home space for the community in the 1940s.”

The end of World War II saw a lot of gay men settle in San Francisco.

As the bar scene exploded, gay and lesbian entrepreneurs began to invest in other establishments and institutions. With the dawn of the 1950s, a community agenda emerged.

“Something happened between 1933 and the early 1960s where people didn’t feel like they had to hide and they wanted a community they could feel safe in,” Boyd said. “The politicization of bars began to happen. The police were trying to shut the bars down so the community had to resist and fight for territory. In that act, there was this articulation of certain political ideals of the right to occupy public space.”

By the 1960s, gay businesses were flourishing on Polk Street and the Tenderloin was a well-established “vice” district that was home to transgender individuals and queer youth. The Compton Cafeteria riot in 1966 marked the beginning of queer liberation. The early 1970s saw an influx of predominantly white, middle-class gay men relocating to the Castro District, which resulted in a gay enclave that was influential in electing Harvey Milk as the city’s first openly gay official in 1977 — just four years after homosexuality was lifted from the American Psychiatric Association’s list of mental illnesses.

“Milk inspired a wave of action that galvanized queer people together,” Romesburg said. “After that comes his assassination and then comes HIV/AIDS.”

The AIDS virus was identified in 1981 and by the mid-1990s, when antiretroviral treatments became available, the LGBT community was utterly transformed. Many bars closed and focus was redirected toward caring for the ill.

“We’re only now starting to grapple with the early 1980s as a period of history,” Romesburg said. “San Francisco is a model for how the community responded to the epidemic. In the face of the federal government’s unwillingness to do for us, we did for ourselves.”

Today, San Francisco still exists as a model for other cities, communities, causes and culture. Its dynamic and resilient past will continue to guide its future.

Elliot Owen is a reporter with the Bay Area Reporter.