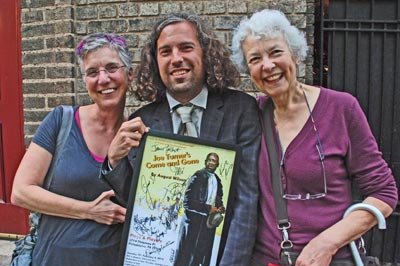 The show highlights and celebrates the voices of ordinary people who built the movements that made the United States what it is today, ending slavery and segregation, protesting war and genocide, advancing gay and women’s rights and struggling to right wrongs of the day. The selected texts cover a range of interpretations of the U.S. Constitution from famous speakers such as Dr. Martin Luther King Jr. and Susan B. Anthony to lesser-known activists such as Chief Joseph and Sylvia Woods.

In a first for “Voices,” Plays & Players artistic director Daniel Student, who was raised by lesbian moms, will perform a reading of Zach Wahls’ 2011 speech to the Iowa House of Representatives against a proposed ban on same-sex marriage to the Iowa constitution. Wahls citied the example of his own upbringing with lesbian parents in his speech and subsequently has used his influence to continue to speak out for LGBT rights, including in a recent speech at the 2012 Democratic National Convention.

The Wahls piece is one of several new additions to the production.

“‘Voices’ has been performed in over 20 states around the country but we added four pieces that have never been performed as part of the show,” Student said. “So part of the deal is to take featured works that Zinn edited and if you want to get features that were not in the book, you were on your own to get permission. We really wanted to do some Philadelphia things, so we got permission from Angela Davis to do her ‘Occupy Philadelphia’ speech. We also got permission to do a speech by Ossie Davis so that we could get his son, Guy Davis, to do the performance. I thought that would be lovely to have him read as his father. The one that I worked on the most was to try to get in touch with Zach Wahls, whom I had not known previously. Through his Facebook page, believe it or not, I got an email address and, even though he is quite a famous person at this point, I got a response within two days from him with a glowing, happy permission to use his speech.”

Student added that he immediately felt a kinship with Wahls.

“He even wanted to come but couldn’t because of a scheduling conflict,” Student said. “It was a very great gift and I felt very connected to him immediately. I think he did as well, given that we were both trying to work on the same political ideals from a very similar perspective, being a straight man of two lesbian parents. In reading this speech and getting close to it, I’ve really felt that this is something that pretty much is my voice. Zach was a good deal younger when he wrote it. I’m 31 but the experiences he wrote about from a 19-year-old perspective are experiences that I can recall from growing up through my teenage years and in college.”

Student said the speeches that make up “Voices” could be especially resonant with the audience given the issues of today. “That’s Howard Zinn’s mission, to remind people that you have to look at your history and know that the world is only changed because people come together and do movements,” he said. “I could never imagine when I was growing up that gay marriage would be linked in such a major way in the consciousness of the public eye and civil rights. It’s a real celebration of where we’ve come from, but also points out that from the moment this country was founded until today, there is still the same struggle and it still has the same context and needs to it.”