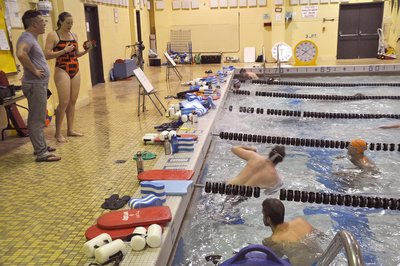 GO! Athletes is a Philadelphia-based national organization of LGBTQA high school, college and former student athletes that is shining a light on homophobia and discrimination in sports and encouraging athletes to recognize and accept all players, regardless of differences.

Across the area, 44 other schools have been invited to participate in GO! and open dialogues among LGBT and straight athletes. GO! executive director Anna Aagenes said that, through local and national outreach groups like this, she hopes more athletes will be comfortable coming out, and that out students might be encouraged to join athletic programs and form new allies.

Sponsorships for the event start at $100 are still available. Team Philadelphia is one of the sponsors, as is Penn Athletes and Allies Tackling Homophobia, which hosts Penn’s annual Pride Games.

Looking for a new look

Team Philadelphia is looking for artists. The organization, which serves as the umbrella group for local LGBT sports clubs, is seeking a new logo to launch the agency into 2013 and on to the 2014 Gay Games IX in Cleveland/Akron. The logo should represent the city and LGBT diversity. Entries must be received by Nov. 9, and the sports clubs will decide the winner from among the top three.

Attach your PDF in an email to [email protected].

The Gay Bowl in Denver, Colo., is the signature annual fall event for flag football, and our own Philadelphia Revolution garnered respect at the the event, Sept. 22-23.

The Revs rumbled through three successive teams in tournament play, giving them their first tournament championship game ever. They kept up with the Michigan Panthers in the finals until the last minutes, when the Panthers scored twice and took the top spot. Congrats to the Revolution for making Philadelphia proud!

Back here, the fall season began Sept. 29, with games every Saturday at Columbus Square Park, 13th and Wharton streets, through Nov. 17. If you want to chat them up about football or anything else, stop by a game or go to an after-play brunch or happy hour. You can also meet the club at its next JOCKS party, Oct. 14 at ICandy.

OutFest, held Oct. 7 in the Gayborhood, is a prime opportunity to talk to Philly’s sports groups and get information about the ones you’re interested in. The sports arena will be on Spruce Street between the mechanical bull and Camac Street.

With the 2014 Gay Games IX in Cleveland/Akron on the far horizon, it is not too early to get your game on and participate locally and internationally. If you are more inclined to be a spectator, consider being a supporter of your favorite group. All of them have expenses and gladly accept donations. Short stops • Gryphons Rugby Football Club battles Wilkes-Barre at home Oct. 6 at George Pepper Middle School; philadelphiagryphons.org. • Philadelphia Rollergirls are holding a workshop 11 a.m.-2 p.m. Oct. 14 at Millennium Skate World, 1900 Carman St., Camden, N.J. Tryouts for Rollergirls will be held during the same hours Nov. 11 at the same location; www.phillyrollerderby.com.

Countdown to Gay Games IX: 672 days. If you have an arm-wrestling or drinking challenge or couch-potato event for Get Out and Play, email [email protected].