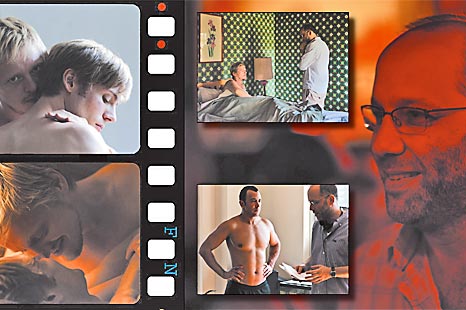 In an empty hotel bar on a summer Sunday morning, openly gay filmmaker Ira Sachs spoke — in hushed, almost confessional tones that revealed his thoughtfulness — about his award-winning new film, “Keep the Lights On. ”

This searing, potent drama, opening Sept. 21 at the Ritz Theaters, centers on Eric (Thure Lindhardt), a filmmaker whose lover, Paul (Zachary Booth), is a drug addict. The s story inspired by the filmmaker’s own experiences in a toxic, codependent relationship.

Sachs demurred at the suggestion that making this film was a way of exorcising his demons.

“I don’t begin to write a film until I have both the intimacy of the experience but also the distance to view the story as a storyteller; the analytic distance is as important as the emotional intimacy for me,” he said. “I feel this film is a rebirth for me. I think that in the wake of the experiences on which this film is based, I’ve become more comfortable with myself, and that’s shifted my work, and the openness of my filmmaking. I think this is my freest film.”

“Keep the Lights On” is certainly Sachs’ most personal project since his extraordinary first feature, “The Delta,” back in 1996. That film concerned a closeted 18-year-old in Memphis who begins a clandestine affair with a half-Vietnamese, half-African-American man.

“As a filmmaker, I’m always mining my own experience because it is what I know best. I try to make films about things I know more about than anyone else,” said Sachs.

He added quickly: “But I never sense that privileges my story over others.”

“Keep the Lights On” is a strong, extremely well-crafted story that has universal appeal. While it will resonate with anyone who has been in a relationship with an addict, the film also speaks to those who want to understand the intricacies of human nature and behavior. Eric and Paul each keep secrets as they find ways of coping with the corrosive nature of their relationship. How each fares by the end of the film is revealing.

Sachs described his drama as a “tabula rasa” and acknowledged that most people who have seen it have talked to him afterwards about their relationships. He also indicated that some folks don’t consider it a “gay” film, and cited an example of a psychologist in his 80’s who said it was, “not a film about love, or addiction, but about obsession.”

“That was very clarifying to me,” the filmmaker observed. “I think what happens, for a lot of people — and this can be through other individuals, it can be through sex, it can be through drugs — is that by narrowing the range of what compels you to another person, you kind of silence the loud noises that are surrounding you. Obsession is a very comfortable place to be.”

He paused, then quoted Emmylou Harris’ song “Where Will I Be,” which includes the lyric, “Addiction stays on tight like a glove.”

“I thought about that often in my life,” he said. “I think addiction can be to a person as much as a drug.”

The filmmaker explained that he was involved with Al-Anon, and learned what he could from his experiences. He said this “research” formulated the content of his film and showed him “how my behavior was cyclical and unenlightened in terms of the role that I played within the dynamic of this relationship.”

Sachs contended that he worked through his guilt and pain over his relationship in therapy, referencing “Goodfellas,” of all films, to explain that his goal in making “Keep the Lights On” was — following Scorsese’s example — to “depict bad behavior, but not judge that behavior, or shy away from the consequence of what we do in our lives. I attempted to make a film about shame, but to do so shamelessly. I wanted to look without judgment at the behavior and the actions of these characters.”

Viewers will connect with — and understand — Eric’s struggle as he tries to help Paul through his addiction and during his downward spiral. His efforts to try to maintain hope for this relationship are evident even when the relationship is at the apex of its crisis.

“Keep the Lights On” unfolds over 10 years, with episodes happening in one day in a particular year or over an undetermined period in some cases. The oblique narrative approach is forceful because it shows how Eric and Paul relate to one another over the various jumps in time — from warm and caring to cold and fighting — but always with some element of love.

“The script is like a diary,” Sachs commented. “If you think about diaries and journals, they are made up of events and ellipses. You write in your journal when something bothers you. So the film is like all the high points.”

These scenes include an incredibly tense moment when Eric places a call to see if he contracted HIV, and a seductive scene in which Eric is offered — and warily tries — drugs, perhaps in an effort to understand what Paul finds so alluring about crack and crystal meth.

“Keep the Lights On” benefits immensely from Lindhardt’s revelatory performance as Eric. Sachs, a Jewish gay man from Memphis, said it was liberating to cast the handsome Danish actor as his alter ego.

Sachs added that he could not easily cast this film in America because of the queer sexuality and the explicitness of the material.

“Believe it or not,” he said, “I sent the material to an agency in Los Angeles that I always send new work to, and I got the response, ‘No one in our agency will be available for this film.’”

This leads to a discussion of the filmmaker’s feelings on contemporary queer cinema today. Sachs remarked that his film is part of today’s “new queer cinema,” which focuses more on relationships and less on coming-out stories. This new work considers what Sachs called “the nocturnal world of gay life.”

“I think we have to recognize that there are still so few images of what gay life looks like, particularly around sex and drugs. We as individuals and as a community have re-closeted ourselves. We’ve created a safe space where we can have certain kinds of experiences, and then we’ve stopped talking about them and stopped looking at them. There’s very, very little about gay life as I know it on film.”

Sachs continued in this vein, insisting that even his film’s title is a call to arms for the audience.

“It’s a direct address for people in the cinema to not live in the darkness. I think as gay people, we have learned — out of need — to live with secrets. This film, in a way, is a testament to the destruction those secrets can create. The film is very, very open about two men who keep everything closed.”

Sachs also maintained that “Keep the Lights On” is not an “anti-drug film,” but rather points to the need to talk about drugs. He said he hopes his film sparks more conversation about the place of drugs, particularly meth, in the gay community.

The filmmaker likened the way crystal meth has been introduced to a sexualized community, like the gay community, to the introduction of crack to the African-American community.

“It was a fuel that set off a huge fire, and I think we are in the middle of that. But there is a way of ending it — and that’s to admit it. I think it’s another closet. We’re very used to creating closets and staying in them.”

As angry as Sachs got here, his calm demeanor reinforced the happy place he was in. Sachs and his partner, the Ecuadorian artist Boris Torres — whose beautiful and sexy artwork is seen under the film’s opening credits — have been together for five years.

“I feel like I came out at 40 in a lot of ways,” Sachs, who is in his mid-40s, said sunnily. “I live a very different way now. This relationship I’m in now is the first honest relationship I’ve been in.”

The couple recently had twins — a boy and a girl — and the proud father showed cute photos of two adorable, smiling babies who surely have had a transformative effect on their parents.

Sachs cooed about his children and acknowledged, “I tried to start keeping a journal when we had kids. Because I found it complex to be a parent — and fascinating and wonderful.”

He mused, “Maybe it’s too wonderful to write about it.”