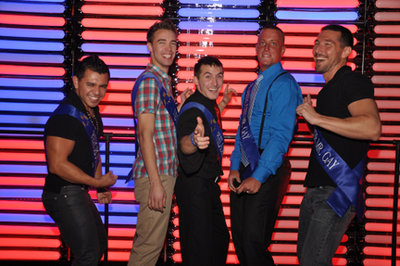 For the second year in a row, an East Coaster won the U. S. Mr. Gay 2012 title. Lancaster native Bryan Dorsey took the top honor in last weekend’s competition, beating out 15 other contestants. Dorsey will represent the United States in the International Mr. Gay competition next year in Chicago.

Dorsey, 35, received a theater degree from UArts but found his true calling in the nursing field. He currently works at Lancaster General Hospital and volunteers in Harrisburg at Adler Health Services. Still interested in the theater side, he starred in a York production of “Rocky Horror Picture Show” in October.

The self-proclaimed country boy was still somewhat dazed on Sunday, the day after his win.

“It’s surreal,” Dorsey said. “I just came to participate and have some fun. I didn’t have any idea I might win. I’m still a little shell-shocked.”

As a health-care provider, Dorsey said he hopes to use his new visibility to help promote health issues in the gay community, noting that the incidence of new infections of STDs is alarming even in the Lancaster area.

He also said he empathized with youth facing bullying.

“I was bullied through grade school, middle school and into high school. In that area, in a smaller community, it can still be very difficult for a gay guy. But I still took a boy to my high-school senior prom.

“I used my question on Friday night about GOP candidates — and what I would say to one — to talk about the horrible anti-bullying laws in Minnesota. The religious right, which is pretty much all Republicans, are fighting against anti-bullying legislation. What’s wrong with those people?”

His answer to the semi-finalist round question of “If you don’t win U.S. Mr. Gay, who would you like to win?” — “Jesus” — got one of the biggest laughs of the night.

“I heard after that my answer probably put me over the top,” Dorsey said, “but I couldn’t pick just one. They are all great guys.”

Following the two-day event — and the second year Philadelphia has hosted the national contest — organizer Bruce Yelk said he doesn’t plan to take on the project again.

“I am very happy to have produced the U.S. Mr. Gay for the past two years as promised,” he said. “The Mr. Gay organization is searching for a new producer in 2012 but I will remain Philadelphia’s city producer.”