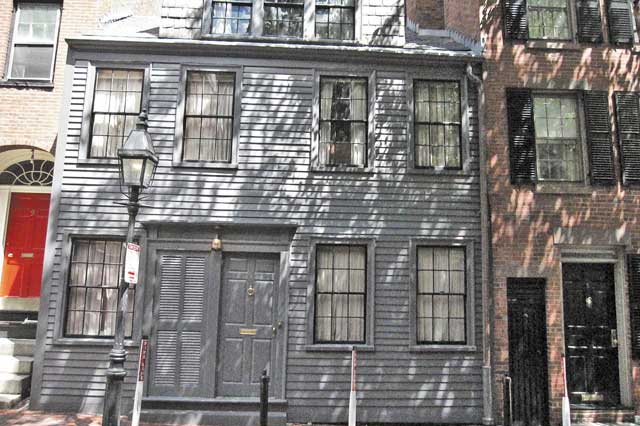 During the time of the American Revolution, George Middleton (1735-1815) was recognized as a great fighter for liberty and independence, and a respected leader among the community of blacks living in Boston, Mass. Local politicians, neighbors and other contemporaries viewed him as a central figure in promoting and garnering freedoms while advancing America’s cause. Throughout his life, Middleton possessed an unconventional style of leadership, a commanding voice and an encompassing presence that motivated the allegiance of those connected to him.

Middleton stands out in Boston and queer histories because of his relationship and the home he built and shared with Caribbean friend Louis Glapion. According to the History Project’s “Improper Bostonians: Lesbian and Gay History from the Puritans to Playland,” Middleton and Glapion maintained a peculiar relationship. As bachelors, they “built the oldest standing house on Beacon Hill,” and “lived together until 1792, when Glapion married and the house they shared was divided in two.”

In 1781, Middleton married Elsey Marsh. According to the 1790 census record, Middleton was the head of household for a family of three. While there exists no concrete proof that Middleton and Glapion had a romantic relationship, it was common at the time for gays and lesbians to marry individuals of the opposite sex and have children while maintaining separate same-sex relationships. At his time of death, Middleton left his possessions to his “true friend Trimstom Babcock.”

Life was probably nothing short of interesting on Beacon Hill. Glapion, who was from the French West Indies, ran a hair salon out of the house he shared with Middleton, and maintained the business throughout his years. (His wife later ran the business from 1813-32 at the Middleton House.) The home probably served as a central place for community organizing and other social gatherings for the early abolitionist movement. Lydia Maria Child, one of their white neighbors, recalls the house being “thronged with company.” Middleton’s home is a featured stop on the Boston African-American National Historic Site tour.

For the most part, Middleton was well-liked and received by most of his neighbors. Child’s father, who had a “natural compassion for the ignorant and the oppressed,” always greeted Middleton. He enjoyed listening to Middleton play the violin each summer evening, and would often visit the Middleton home to see Middleton’s “power in subduing mettlesome colts.” Despite this recognition and respect from her father, Child stated that Middleton was “not a very good specimen of the colored man,” and had questionable morals for being “passionate, intemperate and profane” — perhaps attributes that would later advance Middleton’s causes for independence.

During the American Revolution, Middleton used his leadership abilities to command The Bucks of the Revolution, an all-black regiment of volunteers assigned to protect Boston from sabotage and guard the property of local merchants. While the unit and Middleton’s rank are left unrecorded in official military records, these men and their contributions stand out. In fact, Gov. John Hancock and his son presented the unit and it’s colonel with a flag of distinction to acknowledge their efforts. The ensign was a painted silk, and included the initials J.H. and G.W. (likely for John Hancock and George Washington), a pine tree, a deer and a scroll. Despite not being citizens or equals to white Bostonians, their commitment to the principle of liberty helped pave the way for a new nation.

Middleton’s commitment to America’s liberty also shaped his life of service to other blacks in Boston. He was instrumental in establishing the Boston African Benevolent Society in 1796, which provided important social services, including grants and job placement, for its members. As a noted leader among Boston’s blacks, he delivered a petition signed by black Bostonians to create a school, and served as one of the school’s early instructors. He was also a leading member of Prince Hall’s African Lodge of Freemasons and worked closely with Hall to establish the organization.

In 1808, Middleton worked with Hall to publish an anti-slavery statement that read, in part: “Freedom is desirable, if not, would men sacrifice their time, their property and finally their lives in the pursuit of this?” Middleton would serve as the third Grand Master of the Prince Hall’s African Lodge of Freemasons after the death of Hall and a successor in 1809. Today, the Prince Hall masons maintain an enduring legacy in many African-American communities across the United States.

While Middleton was a respected organizer, he was not afraid to promote radical means to advance the call for freedom. As a black man living in Boston, he was all too familiar with the oppressive system and the ways that blacks were mistreated and systematically disadvantaged. His revolutionary spirit was aroused during a local celebration of the abolition of the slave trade. Child, Middleton’s neighbor, describes an explosive episode between black and white Bostonians, and Middleton’s actions:

“It became a frolic with the white boys to deride them on this day, and finally … to drive them … from the Common. The colored people became greatly incensed by this mockery of their festival, and rumor reached us … that they were determined to resist the whites, and were going armed with this intention … Soon, terrified children and women ran down Belknap Street, pursued by white boys, who enjoyed their fright. The sounds of battle approached; clubs and brickbats were flying in [all] directions. At this crisis, Col. Middleton opened his door, armed with a loaded musket and, in a loud voice, shrieked death to the first white who should approach. Hundreds of human being[s], white and black, were pouring down the street. Col. Middleton’s voice could be heard above every other, urging his party to turn and resist to the last. His appearance was terrific, his musket was leveled, ready to sacrifice the first white man that came within its range. The colored party, shamed by his reproaches, and fired by his example, rallied and made a short show of resistance.”

Middleton lived a life that was dedicated to service of others and the fight for civil rights. Though questions still surround his sexual orientation, it is clear Middleton maintained close relationships and associations with men and helped establish a standard for service, manhood, community building and action. Given his stature as a leader and his selfless contributions to the entire Boston community during the American Revolution, he stands out as a heroic figure for racial and queer communities.