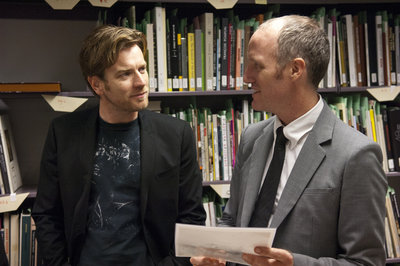 The gay-father/straight-son comedy-drama “Beginners” is far too twee in its opening reel. In several scenes, Oliver (Ewan McGregor) talks to his late dad Hal’s (Christopher Plummer) adorable Jack Russell Terrier (who answers in too-cute subtitles). When he describes in a smug voiceover, “This is the president” or “This is what beauty is,” the screen shows an image of who/what he explains. Much of it is too clever by half. But stick with it. “Beginners,” opening today at the Ritz Theatres, is one of those rare films that actually improves as it unspools. By the end, viewers may need tissues.

The film, written and directed by Mike Mills (see sidebar Q&A), is based on Mills’ own experiences with his father, who came out at age 75 and, a few years later, succumbed to lung cancer. The strength of “Beginners” is in the believable exchanges between parent and child as they each navigate love, sex and dating. By the time Hal calls Oliver to ask him about the house music he heard in a nightclub, the film has moved beyond its preciousness. Hal is attempting to bond with his adult son, even if he sometimes embarrasses Oliver.

Whether audiences laugh or groan at such moments will likely depend on their own experiences. “Beginners” is a highly personal story. Mills tries to make it universal, even if at times he tries too hard.

Hal doesn’t quite come screaming out of the closet, but he is out and proud, sporting a rainbow scarf around his neck. A later discussion Hal and Oliver have over the meaning of a rainbow flag is, on the surface, about gay awareness. But this scene has considerable power when Oliver finds the flag while he’s cleaning out his father’s papers. Such moments plumb the unexpected emotional depths of “Beginners.” Things that seem silly or corny at first often take on greater significance when remembered.

Another exchange that is initially, well, queer, involves Oliver trying to inform Hal’s younger boyfriend, Andy (Goran Visnjic) about Hal’s stage-four cancer. However, Andy disarms and distracts Oliver by talking about sex and the fear straight men have of gay guys. It’s an awkward moment but, later, the two men share a touching embrace that overcomes the gulf between them.

Mills nicely parallels Oliver and Hal’s respective romances (which unfold years apart) by juxtaposing moments such as Hal and Andy kissing with Oliver kissing Anna (Mélanie Laurent), an actress he starts seeing. The way both father and son start coming out of their shells is the film’s not-so-subtle theme. Oliver fears commitment because of how he viewed his parents’ marriage. Observing Hal’s new romance, Oliver learns how to love and be loved. It’s effective and affecting.

And the emotional pull of the story stems from the way the characters are presented; there is no pandering to stereotypes. When Anna talks to Oliver about his sadness, it is genuine; he is in mourning. Hal’s candid speech about his wife proposing to him is revelatory. When Hal talks about wanting to “fix” his sexuality, it is an experience many gay men who get married, or date women, share. Mills displays a perspicacity in “Beginners” that sneaks up on viewers.

This is not to say the film doesn’t have unwieldy moments. Scenes of young Oliver with his mother (Mary Page Keller) seem too ready to vilify her, which is unfair.

However, “Beginners” is absorbing because viewers will care about the characters. They will want Oliver and Anna to be together. And it’s hard not to tear up in an almost-throwaway moment in which Oliver observes his father’s nurse rubbing gel into Hal’s hair. The unspoken love between father and son here is undeniable.

The performances by McGregor and Plummer also contribute to the film’s value. McGregor is entirely unselfconscious as Oliver, and his everyman quality conveys the emotions he has some trouble articulating but no difficulty expressing with his body language. Plummer is also fantastic, never making Hal a camp caricature. His feelings about (gay) liberation may be a bit in-your-face, but the actor never makes them over the top.