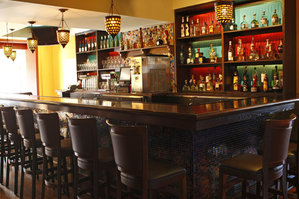 At first glance, Cantina Feliz, 424 S. Bethlehem Pike, and Guapos Tacos Truck don’t appear to have too much in common. One is a comfy restaurant tucked away in the suburban hamlet of Ft. Washington. The other is a taco truck that can usually be found in Love Park during the lunch rush on certain weekdays.

But both are special because they are directly and indirectly products of the super-talented and successful Jose Garces: Cantina executive chef Tim Spinner was a Garces protégé for seven years, working at both Distrito and Amada; Guapos is a Garces project. And, more importantly, both know how to satiate our healthy lust for tacos.

But we’ll get to that later …

Cantina Feliz has a definite wow factor that would make anyone glad they made the trek out to the burbs. Our highest praise goes to the ceviche verde ($10.95), which was the perfect convergence of seafood, citrus, spice and the most unexpected and welcome addition of lime sorbet.

Not far behind was the pulpo ala planxa ($11.95), a delectable dish of crispy, well-seasoned octopus and potatoes that can be given a considerable boost of fire with the jalapeños served alongside, depending on how much you want to put your tastes buds through the wringer.

It’s easy to see why crab fundido ($11.95) is popular, with jumbo lump crab swimming in a sea of cream cheese and queso. But it paled in comparison to the two adventurous dishes that came before it, a leisurely raft trip down a calm river when just minute before we were swinging through the jungle on vines, outrunning the lava flow of an exploding volcano and getting chased by frenzied monkeys and vampire bats … Choose your own adventure.

Did we mention Cantina Feliz has a wonderful selection of strong alcoholic beverages?

We don’t know how anyone makes it to the big entrées, but they are high quality as well. The New York strip ($27.95) was top notch with a flavorful adobo and chimichurri making the grass-fed beef even tastier, and a nice chipotle bone-marrow cream working wonders on a side of spinach.

Meanwhile, back in the city, Guapos Tacos has as strong an appetizer game as anyone can expect from a restaurant on four wheels. The guacamole ($6) is quality. The tostada verde ($7) is fresh and flavorful.

But the superstars at both Cantina Feliz and Guapos are the tacos. Both places make a great fish taco (Guapos $7, Feliz $12.95). Both are flavorful and have some serious talent going on with the slaw, but Feliz has the edge when it comes to the wow factor. Its fish is crusted with plantain chips and has the added bonus of a flavorful array of condiments to choose from. Guapos has the edge on the vegetarian arena with mushroom tacos (Guapos $6, Feliz $11.95). Both places do a great job of bringing mushrooms into taco territory, but Guapos’ mushroom tacos rules in the texture and flavor department, making us forget that we’re essentially grazing with this taco.

It’s almost too close to call with their carnitas tacos (Guapos $7, Feliz $10.95). Both are juicy and tender but, if you like a nice crunch on the outside of your pork, Feliz might win by a hair. But on the other hand, Guapos does a stellar job with the garnish on the pork taco, which includes the sweetness of finely chopped pineapple. It’s a tie.

Guapos has a duck taco ($8) that comes really close to making us forget that there are fish tacos on the menu.

Whether it’s dining in the suburbs or grabbing a quick bite in the heart of the city, Garces’ protégés are delivering the goods and doing their mentor proud.