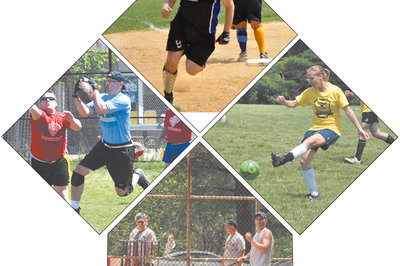 After a long, cold, snowy winter and a chilly, damp spring, it’s nice to get outdoors for some sun and fun. Philly has long been a sports town, and the LGBT community is no exception. Not only do we have three self-proclaimed sports for athletic voyeurism, we also boast more than a dozen different leagues and organizations, many of which are participating in tournaments and championships this summer.

But you don’t have to be a three-sport athlete to be active in the Philadelphia gay sports scene. All skill levels are welcome and most clubs welcome visitors. So get off your beach bum and check out a team, championship, tournament or season game.

First up is the Independence Dragon Boat Regatta on the Schuylkill River, June 4. Team Philadelphia is a two-time defending silver medalist in the mixed division. The rowers will compete in three 500-meter races: a time trial, a division placement and the championship race. Bike, blade, board or walk up Kelly Drive between 8 a.m.-4 p.m. Saturday and look for the crowd around the rainbow flag. This is a fun, relaxed event where food and drink are available.

Just two weeks ago, the Philadelphia Gryphons rugby football club completed its season with a 61-0 win over the Boston Ironsides. This weekend, players are going to the USA 7’s Collegiate Rugby Championships at PPL Park in Chester and, on Sunday night, the Gryphons are hosting a beef-and-beer fundraiser at 7 p.m. at the Loews Hotel Philadelphia, 1200 Market St. The fundraiser will offset costs for the team to play in the 2012 Bingham Cup in Manchester, England.

If you missed it last weekend, the Philadelphia Falcons soccer league and the City of Brotherly Love Softball League held their annual Memorial Day weekend tournaments. About 60 players from Pennsylvania, Delaware, New Jersey and Washington, D.C., competed in the soccer tournament at Edgely Fields on May 28 and finished their day in the sun with a cookout in Fairmount Park. The Falcons hold scrimmages regularly during the year and anyone can join regardless of abilities (falcons-soccer.org).

The CBLSL continues its season through July and culminates with a cookout, home-run derby and a block party on July 31. The league exploded to over 600 players on 34 teams this year, which allows every skill level to find a home. The teams compete at Dairy Fields every Sunday through July and welcome spectators (cblsl.org).

This year in August, CBLSL hosts the ASANA women’s softball tournament in Philadelphia for the first time. Thousands of players from across the continent will converge in Philly Aug. 23-27. Opening ceremonies, a golf outing, a cheese-steak party and much more will fill in time between games. Go to www.bringthelove2011.org for complete information.

Do you like to watch? During the week of the ASANA World Series, our own Philadelphia Phillies will hold the ninth-annual Community Night at Citizens Bank Park on Aug. 26. From the ceremonial first pitch through the last out, this is one of the brightest stars in the nighttime sky of spectator sports. This year, in conjunction with the ASANA World Series, there will be a tailgate party starting at 4 p.m.

If you’re more into personal achievement than team sports, the Frontrunners meet at Boat House Row to run Kelly Drive every Saturday morning starting between 9:30-10 a.m. Run at your own pace alone or with someone and join some of them for brunch after the run. Many runners will participate this fall in the ING Rock & Roll half marathon Sept. 18 in Philadelphia. More information is at www.philadelphiafrontrunners.org.

Women with wheels can take it easy or get tough with Sturdy Girl Cycling, which offers weekly or monthly base rides, Sturdy Girl tempo rides or Dirty Girl mountain-biking rides. Information on dates, times and starting locations for pedaling around town is at www.sturdygirlcycling.com.

The Philadelphia Liberty Tennis Association has singles and doubles games every Saturday afternoon and Sunday morning in FDR Park through October, when the club championship takes place. PLTA has 80 active members and welcomes newcomers to the courts and to other social events during the year. For another Philadelphia first, the PLTA is welcoming players from Boston, New York City and Washington, D.C., as the club hosts the 2011 Atlantic Cup Aug. 5-7.

This summer also will include a couple of tournaments on mats and in alleys. The Spartan Wrestling Club Tournament is at the Unitarian Church June 18. Check out some maneuvers that may be useful at home and become a fan of singlets. Hit the alley for the Liberty Bowl Invitational bowling tournament, rolling July 1-3 at Laurel Lanes, 2825 Route 73 South, Maple Shade, N.J.

But wait, there’s more! If you think this is all just Philadelphia fun, the GPFFL Revolution is traveling again this year to compete in the Chicago Pride Bowl June 24-25 and the Gay Bowl from Oct. 8-10 in Houston; 10 members of the FINS Aquatic Club are heading to Hawaii for an international competition, Falcons players will compete in the Toronto International Pride Cup, and a number of the women softball teams are traveling to play in tournaments in Boston, Knoxville, New York City and Washington, D.C.

If summer isn’t your thing, wait for the fall sports. The CBLSL will again start Fall Ball in September and the Gryphons, Falcons and GPFFL are all preparing their fall schedules. Dodgeball will return to 12th Street Gym on Thursday nights and there are still women’s football, martial arts and roller-derby action clubs to watch or play.

If the summer doldrums get you in a funk this year, hit a park and cheer on a hunky guy, hot woman or an entire team if you want. At least in these leagues, you’ll likely be able to guess which team they’re playing for.