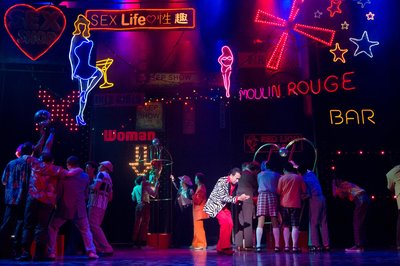 Walnut Street Theatre is producing an up-to-date version of the classic musical “Miss Saigon” through July 17, featuring many familiar faces.

“Miss Saigon” debuted in London in 1989, telling the tragic story of an American soldier and a Vietnamese girl who fall in love during the turmoil of the Vietnam War, only to be torn apart after the fall of Saigon. It went on to become a worldwide smash in one of the longest-running Broadway musicals.

The cast features Melinda Chua and Eric Kunze starring as the story’s main love interests, Kim and Chris. Both actors performed in “Miss Saigon” during its Broadway run. Out actor Bobby Martino was in the original London production in 1989, cast as a Vietnamese customer at Dreamland, and at a Vietnamese bar where Kim and Chris meet.

Martino had a tertiary character role at the time of the original production but he said had his eye on the role of the Engineer, the sleazy owner of Dreamland, originally played by Jonathan Pryce. And he eventually worked his way into that role.

“I’m proud that this role was started by Jonathan Pryce,” Martino said. “[I’m proud] to play The Engineer as a Filipino man. It’s been a journey, but it’s been 22 years. When it was given to me I was very young. I played the Engineer when I was 26. Jonathan had left already, but Jonathan was 56. The understudy was 47. Me just having the audacity to say, ‘You only have one understudy. Can I just be a standby in case something happens?’ After two performances with our first understudy, he lost his voice and I was on with no company or orchestra rehearsal.”

Martino is back on board as the Engineer and said the story of love and loss at the core of “Miss Saigon” is probably more relevant today than when it debuted.

“God created the world in seven days. We recreated the show in eight days,” Martino said. “It’s amazing. A lot of us have done this journey before — me, more than anyone else because I was in the original company when it opened in London. We all decided that all our games are out and we are going to recreate everything so that we can rediscover our love for the show and the truth of the show. With all the wars going on, our story is no longer fictional. It’s not fictional to start with. It has to be real because some of the people are going to watch you as if you are their sons and their fathers going through the war and we’ll tell them the story of what it is to be in the war. Now that we have more wars, more than any other time in the world, this is more real. It’s paying tribute to all the soldiers who believed in the war. But for the younger side, I’m giving tribute to those who got victimized by the war.”

He added that the new production allowed him to re-examine the nature of the Engineer, who can be a hard character to like at times.

“I came back to the heart of it,” he said. “I need to find the humanity of the Engineer, why he did it. I will not reveal it to you in the first act. But before that curtain comes down, you will know exactly why he became like that and why he did that. He’s a survivalist and opportunist. If you have nothing, you try and create something that becomes your world. For him to start as early as 7, and his job was to pimp his own mother? My lord! That’s the last number of the show where he reveals everything.”

Having performed as the Engineer internationally, Martino said there is something special about being able to perform that role in the United States.

Martino added that performing in Philadelphia will be extra special for him because of familial ties to the area.

“This is almost my Philadelphia debut,” he said. “This is the town my mother moved to after she emigrated to L.A. from the Philippines. She decided we don’t belong [in L.A.]. For some reason she chose Philadelphia. My mom and my four sisters lived here for 20 years. I only migrated to America 10 years ago. I’d lived in the Philippines trying to have a pop career. Then the first musical came into my life. Everything happened to me so quickly. I became a scholar. I became the lead of the first Filipino musical. Then I went to ‘Miss Saigon.’ My journey hasn’t stopped. [‘Miss Saigon’] touches the human heart. I have uncles and parents and cousins that I left behind. I don’t know what happened to them. I don’t know if they’re alive. Just watching this musical pays tribute to my dead relatives. It’s so heavy. When we started, we had the responsibility of paying tribute to those who were victimized by war. We always think it’s a documentary musical more than anything else. We were so scared to open in Broadway because Americans failed in the Vietnam War.”

Martino is as passionate about LGBT issues as he is about his role in “Miss Saigon.” He recently filmed a message for the It Gets Better Project, which works to counteract antigay bullying and discrimination. Martino said, for him, it was important to tell people how important it is to know someone accepts you for who you are.

“I come from a family that accepted me because I was mentored by my own grandmother,” he said. “I loved singing Shirley Bassey songs and I would use blankets to recreate the gowns and then I would use the cord of the ironing machine as a microphone. My grandmother would give me her hair clips to keep the gowns from falling off. We would just play for hours. She would say, ‘You’re really great, but don’t show this to your dad.’ I never understood because there was no definition for me that ‘Bobby, you’re gay.’ It was just like you love doing that. That is you.

“I never believed that people should suffer because of a label. Labels are a human preconditioning. I hate that we have to be called gay. What is gay? Did we just undersell ourselves? They’re straight and we’re gay. It’s like saying, ‘Hi, I’m crooked.’ Even now, I can’t find the word. I know who I am but even my identification with the word makes me cringe because you labeled me with that cringe-able name. If I can recreate all of this, I would not call myself gay. I would call myself divine. I would call myself. I’m the one who knows who I am. I am the one who wanted something creative. I am the one who’s original. There was something that was allowed, even at a young age by my grandmother, to be an original.”