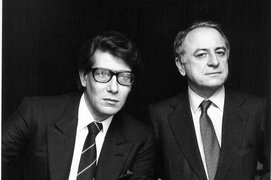 An intimate look at the life — and the collections of houses, paintings and objets d’art — Yves Saint Laurent shared with his partner Pierre Bergé, the documentary “L’Amour Fou” is sure to please fashionistas, interior decorators and art aficionados. This film, opening today at the Ritz, chronicles the designer’s career and the couple’s relationship over the decades. Director Pierre Thoretton’s narrative approach uses the deaccessioning of the couple’s homes to provide a look back on the significant times in their lives.

“L’Amour Fou” has a deliberate air of nostalgia about it — and this is not just because there are wonderful archive clips and photographs of Saint Laurent and/or Bergé with the likes of Andy Warhol, Mick Jagger and Jean Cocteau. This love story has Bergé recounting how he and Saint Laurent met and moved in together a few months later. There are anecdotes about their brief separation during the 1970s, when the designer abused alcohol and drugs. And there are observations about how the men were a “power couple” in the 1980s; their love had what was deemed “emblematic value” during the AIDS crisis.

Bergé also eloquently discusses topics such as Saint Laurent’s depression, and the way his fame and jet-set lifestyle took its toll on him. He became more isolated and less social as he grew older. These accounts have a particular resonance because it is Saint Laurent’s partner, a man who loved him and knew him best of all, who tells them. When the designer’s friends and colleagues, like Betty Catroux, discuss the crutch drugs and alcohol provided him, “L’Amour Fou” is far less interesting.

Bergé’s wry observations extend to his loving descriptions of Saint Laurent whiling away an afternoon at one of their houses, or reflecting on what his partner enjoyed about their library. Such scenes illustrate the warmth of their relationship and how Saint Laurent’s lover appreciated what they built as a couple. It’s charming when Bergé talks about getting his pilot’s license so he can fly Saint Laurent to their house in Normandy for the weekend.

The theme of escape is rather prominent in “L’Amour Fou.” The idea goes a long way to explaining why Bergé and Saint Laurent created such an extraordinary home in Morocco (and elsewhere as well), to combat the stress of creating a collection every season.

Bergé’s candor is what makes “L’Amour Fou” so rewarding. His melancholy makes the tearing down of the houses sad, but he has a positive attitude. He hopes that the items in their collection will “fly” into the hands of others who will enjoy them as much as he and his partner did.

Oddly, it is the artwork being removed and sold off that provides the film with its greatest power. A sequence of paintings being taken off the walls is quite moving, and a lengthy discussion about a Brancusi sculpture is fascinating. Likewise, there are lovely moments of Bergé describing Saint Laurent’s 1965 collection of “Mondrian” dresses, which leads to him admitting that he never dreamed he might one day own a Mondrian painting.

The various clips of YSL fashion shows are another highlight of the film. One sequence, set in a stadium and featuring 300 models from five continents, is particularly stunning.

But for all the beautiful people and clothes and art, “L’Amour Fou” can get both superficial and tedious at times. The filmmaker’s efforts to trace the political and social changes over the decades does not always work. An interesting controversy over Saint Laurent’s perfume Opium provides an excuse to run an amusing advertisement, and a clip of why Asians were so incensed by it. Although the ugly episode may have contributed to the designer’s depression, it feels tacked on here — less relevant to the couple’s relationship.

In addition, the acknowledgement of Mitterand’s election, or a scene of the Village People singing “Y.M.C.A.” — seem to gloss over larger points about the changing social world that work against the more personal nature of the film. Thoretton’s weakness as a filmmaker is not tightening his focus on his subject(s). His macro approach to a micro topic is an error in judgment.

This may also be why the auction scene that ends the film is not as strong as it might have been. While viewers have an appreciation of the fate of the Brancusi statue, there is an overall lack of emotional pull in this finale because of how it unfolds.

Instead, an intriguing final shot of Bergé staring back at the camera speaks volumes about what has already been so elegantly and eloquently said.