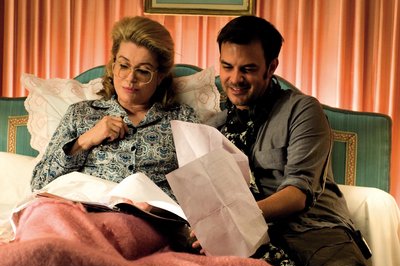 From a suite at the Mercer Hotel in New York City, out writer/director François Ozon, whose credits include “Swimming Pool” and “8 Women,” exhibits a teasing playfulness when he starts talking about his new film “Potiche,” a fun comedy starring Catherine Deneuve that opens at Ritz theaters today. He plays with his scarf and dons sunglasses, in full celebrity mode. Even when he returns a Diet Coke — “It’s like poison!” he exclaimed, offended by the taste of the expired beverage — he hardly acts like a diva. Ozon is charismatic and perhaps even a bit silly, but he makes his point.

These same qualities are also very much in evidence in “Potiche.” Deneuve plays Suzanne Pujol, a 1970s bourgeois wife who takes over her husband Robert’s (Fabrice Luchini) umbrella factory when he becomes ill during a workers’ strike. She works with her ex, Maurice Babin (Gérard Depardieu), a former union leader, to resolve the labor disputes and gain a sense of independence. Her children, Joelle (Judith Godrèche) and Laurent (Jérémie Renier), as well as Robert’s secretary/mistress Nadège (Karin Viard), also figure prominently in the comedy.

“Potiche,” based on a hit play, fulfills a desire Ozon has long had to make a “political” film. He explained, “I wanted to do this in a very light way. The message goes down better that way. The male chauvinists laugh about themselves, and the women who feel like trophy wives can laugh, too. When you want to say something about society, or the rights of women, it’s not good to put that in a drama.”

The filmmaker cited Billy Wilder — someone who made films about American and German society with pointed comedy — as an influence. Ozon also said he likes to mix up genres. “I know it is sometimes disturbing for the audience, but I think the audience is clever and able to go in different directions. You can have a funny scene and then a sentimental one. It’s not incompatible. It’s chemistry: You realize in the editing if it works.”

When Ozon is asked what makes him laugh, he draws a complete blank. After a significant pause, he admitted, “In movies, I smile more often than I laugh. I like things that surprise me. I like it when there is something witty or edgy about the situation.”

“Potiche” is more witty than edgy, as the film has a farcical quality to it. There are many comic reversals of fortune and an amusing suggestion that Laurent’s romantic relationship may have an incestuous connection. Another wink-wink joke in the film suggests Laurent is gay.

Ozon explained the theme of incest is very popular in French comedy. “In this film, I wanted to play with that and make it more transgressive. The fact that Jérémie’s character could be gay was not in the play. But because he is very close to his mother, I thought that it was a good idea.”

The discussion moved on to the très-beau actor Renier, who wears period 1970s clothes, including skin-tight pants that leave nothing to the imagination. “All the men looked gay at this time because of these pants!” Ozon effused. He fondly recalls the ’70s — the era of his childhood — and memories of “Charlie’s Angels,” along with his grandmother’s telephone, which “had a kind of carpet on it.”

He returned to talking about Renier, with whom he first worked back in 1999 on the film “Criminal Lovers.”

“We had a very strong relationship on that film. Jérémie was much younger — very cute and very fragile. I was a monster with him, but he loved me being a monster with him. We had a very good experience. I wanted to work with him again — he’s becoming a great actor — but always taking very serious, tough parts. If you know Jérémie, he’s funny, light, smiling and sexy, and he doesn’t have the opportunity to show these qualities.”

“Potiche” allows Renier to exhibit his comic flair, and he’s terrific. The film also gave Ozon the chance to reunite with Deneuve, who costarred in his 2002 film “8 Women.”

“It was a real dream to work with her again,” he gushed. “It was quite difficult on ‘8 Women’ because she was one among eight and I had the responsibility to be democratic with all eight women. I didn’t develop a deep relationship with her. On ‘Potiche,’ because she was the star of the film, she was the heart of the film. I needed to be close to her, and she needed to be close to my mise-en-scene so she’d know exactly what kind of movie I wanted to do.”

Ozon has said in the past that he finds making films about female characters easier because he has “more distance” with them. However, with this story, he acknowledged that he was closer to the character of Suzanne.

“I wanted to empathize with her, be with her,” he insisted. “I think Suzanne is likeable, although she’s a bit ridiculous at the beginning of the film.”

That said, he does not think being a gay man makes him more sensitive to female characters and/or telling female stories.

“It’s very American to see things that way,” he said. “I don’t think your sexuality has anything to do with your sensibility. I like to work with women because I like to make intimate films, and films about intimacy — about sensitivity, and emotions. I feel an actress is better able to [express] that on her face. The evolution of a woman in society is also more difficult — she has to fight more than a man. It’s more interesting to see that.”

Ozon also thinks it’s “very American” to say “The Personal is Political” — a sentiment that was a hallmark of the feminist movement. He explained that he wants “Potiche” to “open people’s eyes, and put them in touch with people who are very different from themselves — so they will be able to understand them. You see this woman changing, and finding her place in society.”

As for Ozon’s own place in society, he revealed, “I think I’m in a very good place. I can do what I want in movies. I can kill people. I can have sex with whom I want on film. To be an artist, I think it’s the best place, because it’s fiction, and people know the sex and violence is not reality. For me, it’s like therapy.”