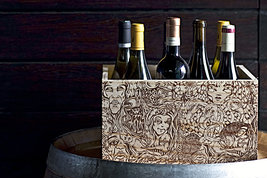 We were tempted to believe that the good people at Biba, 3131 Walnut St. , might be taking themselves too seriously when their website described their cheeses as “sexy.”

But then we ventured to the cozy University City wine bar on a busy weeknight and found that the menu separates the selection of cheese plates into six distinct and honest categories: clean, luscious, stinky, approachable, stoic and racy.

We opted for the La Tur ($8.50), a soft, rich, creamy cheese that complemented the sweet poached cherries that accompanied it. Had we been in a more festive mood, we might have braved the stinky cheeses, but we decided to save that for next time.

It turned out to be a good dish with which to sample the featured wine for that evening, the “earthquake blend” ($9.50 glass), which had a great backstory: The earth shakes in some country and barrels containing two different types of wine clank together and break. Poof! Earthquake blend. Anyway, it was red and we really should have taken a bottle home.

Biba specializes in the small, simple dishes that facilitate an evening of wine sipping and conversation, so there’s nothing too complicated on the elegant menu. Which was fine by us, because the simple pleasures looked the most enticing.

The warm white bean and Tuscan spread ($4.50) was a more refined version of spinach dip — far tastier and less expensive than its bar appetizer counterpart too. The mole-spiced salame ($4.50) was a treat with sweet and sticky honeyed almonds, giving the plate a balanced flavor and a nice texture. Another savory and sweet plate was the sliced speck ($7), which came with a tasty apricot mustard.

Most of Biba’s crostini made for a good nosh as well. The apple tree chèvre with beet mostarda ($4) had a nice tangy flavor. The Birchurn blue cheese with Lancaster spiced pear butter ($4.50) ventured more into sweet territory, and was also very good. If we were more enamored with wild mushrooms (we’re close to being done with them for life), we probably would have liked the truffled wild mushroom pâté ($4) more than we did.

Wild mushrooms were also on the scene for the truffle egg and potato with spinach and fontina ($7). The hot and comforting dish needed slightly more aggressive spicing to make it sing, but instead it just came across as the sum of its parts.

Especially ravenous diners can take on more substantial fare such as Biba’s meat plate ($11.50) or any of the pannini, which come in varieties such as smoked chicken with roasted pepper ($9.50) or eggplant caponata with pesto and mozzarella ($9).

Desserts were simple and delightful as well. We were treated to a plate of champagne and dark chocolate truffles with candied oranges. The truffles were sinfully rich and capped off the meal in fine fashion.

We want to hang out at Biba more often.