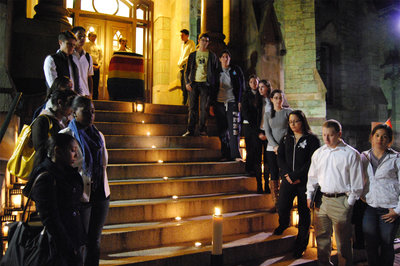 Last year, we weren’t the only ones who liked our favorite photo of 2009: “The Kiss” won two awards and was instrumental in a third.

It would be presumptuous to think we could win multiple photo awards again this year but, nonetheless, we’d like to share our favorite photos from the previous year again.

More candlelight vigils were held last year in Philly than any years in recent memory. In October alone, we went to four that were especially poignant and tragic — reminders that many youth do not have the support, resources or strength to be comfortable with their sexual orientation.

The front-page photo, taken on the Penn campus, was part of a statewide remembrance at 25 Pennsylvania colleges and universities, held as a tribute to the many LGBT teens who committed suicide in the summer and fall of 2010.

Hundreds of photos were taken of the historic rainbow flag raising Oct. 6 at City Hall — all from the ground looking up. But this picture, with its different perspective, received more favorable feedback than any other last year.

This one is also about community cooperation. We have Gloria Casarez, director of LGBT affairs for the mayor, to thank for helping us get this photo.

In a year when one of the armed services’ greatest battles was equality in the ranks, this photo was taken at the Korean War Memorial, where Gov. Rendell attended his final Memorial Day Service as governor — just days after the U.S. House of Representatives passed a defense spending bill that had been amended to include a repeal of “Don’t Ask, Don’t Tell.”

The statue in the foreground captures our sentiments toward that discriminatory policy, which Congress and President Obama repealed: “The Final Farewell.”

For sheer color, we picked this picture of Mayor Nutter and many LGBT business owners, community leaders and allies. The rainbow ribbon-cutting, confetti, umbrellas and sign presentation kicked off two weeks of promotions and parties in the Gayborhood.

ACT-UP kept us jumping last year. This photo was taken during a protest of proposed state AIDS cuts along South Broad Street. Protesters filled the median with “body bags” and flowers to signify AIDS victims dying because of inadequate education, prevention and protections from the HIV virus.

We also like this photo because City Hall always makes for a nice dramatic backdrop.

The DC Cowboys were part of an historic Fourth of July parade in Philadelphia last year, along with Frank Kameny and the Philadelphia Freedom Band. This was the first time openly gay LGBT individuals and groups had been invited to participate in the parade.

Our photo of Kameny may be more historic because of his participation in the original protests at Independence Hall, but this one captures the energy and enthusiasm of the event.

We also like this photo because Independence Hall always makes for a nice dramatic backdrop.

We attend many events for many organizations at a wide variety of venues. Skyline views are really nice, but it’s really just another room that’s really high up.

We easily picked this one — with the great open space and dramatic setting — from the Bread & Roses annual recognition at the Franklin Institute.

We also like this photo because Benjamin Franklin always makes for a nice dramatic backdrop.

The OutFest youth appreciation was an amazing moment last year. Sharing the stage with the youth while the minutes-long applause filled the streets was a thrill. We really like this image of thousands of people who stopped for a moment to recognize our youth.

Rainy days and PrideFest had been strangers the past few years, but 2010 brought some torrential rains early in the afternoon. Clothes and hair may have been dampened, but spirits were not.

The Blizzard that Broke the Record (Feb. 12-18) Just look at it. (We think this one could win an award.)